Titans slowly stumbles ever closer towards its conclusion with another fragment of story. Where Kory came from is revealed along with why she was searching for Rachel, while Rachel herself struggles with the danger of her dark side, and Gar is haunted by the memory of the man he killed.

Koriand’r kicks off right as “Donna Troy” left things before they were interrupted by the otherwise pretty good “Hank and Dawn“, with Kory having regained her memories and immediately choking out Rachel after remembering she was sent to kill the girl. The moment is interrupted by Dick and Donna bursting in, with the latter whipping out her glowing golden lasso to yank Kory off, and as nerd-tastic moments go this one is going to take some beating. 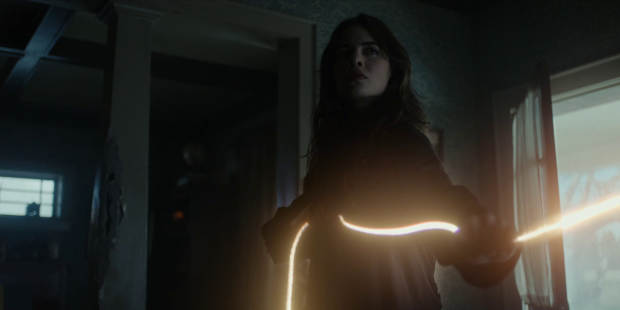 “It is pointless and painful to resist.”

Kory soon regains her senses, and is immediately hit by the duality of her thoughts about Rachel, on one hand seeing her as someone who simply has to die, but also recognising the young girl she’s come to care for after briefly getting to know her. This was a perfect opportunity to explore how people’s personalities are informed by their experiences and memories, but instead after recovering Kory immediately drives off, driven by some intangible instinct to locate the information required to be imparted, which can’t be done here because the characters need to be separated for the rest of the episode to play out in the way the writers need it to.

Dick and Donna track her to a warehouse, where an overly dramatic moment reveals Kory’s spaceship, since for all of the flashes and implications we’ve had regarding Kory’s enigmatic origins, until now it hasn’t actually been explicitly stated she’s an alien. That Dick and Donna are surprised but not overwhelmed by the appearance is a silent indicator that it’s far from the most awe-inspiring thing they’ve experienced. Their formative years with Batman and Wonder Woman will have exposed them to the terrifying wonders of the universe, so a cloaked spaceship in a warehouse would barely rate halfway up the scale of all the weirdness they’ll have seen.

Inside the ship, a big book of backstory provides an expository infodump that allows the outstanding remnants of the series setup to be related for people not already familiar with the comics or who haven’t already inferred things for themselves, naming Trigon for the first time and stating him to be a demon who will eventually cloak the universe in darkness. This includes Kory’s home world of Tamaran, where a prophecy in the book talks of his child who will allow him access to our universe, and so she must be killed to save all of reality from his directionless destruction. Quite how it was established this child had been born is not made clear, or that she will be in a position to have the ability or inclination to condemn the universe to an eternal night. 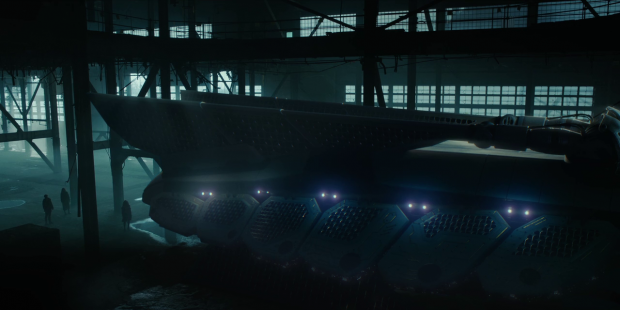 Back at the house Rachel continues to have her sense of self-worth eroded, now concerned that she’s somehow broken Kory, and with everything she’s gone through it’s a wonder she’s still sane. This new development leaves her in the “Everyone who gets close to me dies” despondency that further piles on to the ever-swelling litany of burdens she’s had to take on. The moments where she can barely stop herself from crying reflect this, highlighting just how overwhelming her experiences of the past week have been.

The episode mixes sci-fi and horror, since as well as a spaceship and talk of other worlds, we’ve also got a demon house exerting influence over its occupants. I’ve previously mentioned thoughts about the horror angle of the story, and am still of the opinion that the series could have been improved had this remained its focal point, as the otherworldly goings on surrounding Rachel’s emerging abilities have been far and away its most interesting aspects.

Gar’s purpose so far has been largely to provide comic relief and geek out over the more famous characters, and as a result his development has so been a bit thin on the ground. After being accidentally hit by Rachel’s Soul Self, he begins having hallucinations of the doctor in the asylum he killed while in his tiger form, and of himself stained with his blood that won’t wash away. The symbolism is a little overwrought, but it gives Gar some sorely needed focal scenes. The death will weigh heavily on him, both from it being the first person he’s ever killed combined with his pacifist tendencies being forever tainted with the knowledge of what he’s done. It will also likely make him question how much control he can maintain the next time he shapeshifts and could well avoid doing so as a result. Since this is an integral part of who he is, being forced to deny it will likely erode his very sense of self, assuming he survives the mysterious ailment he suddenly falls foul of. 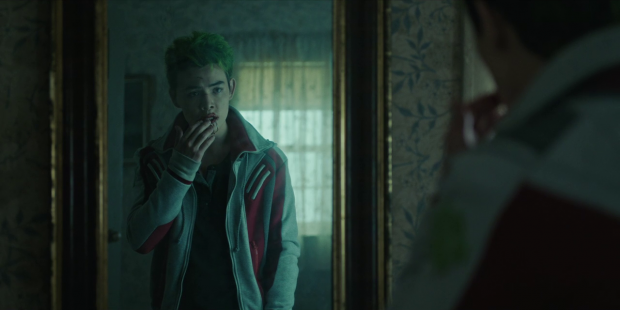 As he deteriorates, apparently the only thing that can save him is Trigon, who Rachel of course has to summon in order for him to do so. She does this with very little thought or hesitation, and the action consists of reaching into a mirror rippling like rusty water and pulling him out. It’s a pretty underwhelming moment – especially when compared to the dramatic climax of Doom Patrol and its swirling portal of purple darkness – as is his appearance of an ordinary looking man (Seamus Dever) instead of a sixty-foot monstrosity belching hellfire. Maybe they’re saving the CGI budget for the finale.

The revelation of Angela as being on the side of the cult explains her reticence in revealing Trigon’s true nature, but it still doesn’t deal with it being more than a little messed up for a mother to emotionally manipulate her own daughter. Also, while it is itself an interesting departure from comics lore, it’s still a rehashed trope of countless horror movies with a plot revolving around a demonic scion.

It was only by the actions of the group that this set of circumstances actually came about where Rachel would have been willing through desperation to bring Trigon through, and since nobody could have second guessed or manipulated them to this extent, it raises the question of exactly what was the orininal plan was. This, however, is something else that we are required to not think about. Also, since Angela was a part of the apocalyptic death cult it makes little sense for her to have been locked up in an asylum operated by the people whose goals she shares, unless we’re to believe that the place being lain to waste was all part of the plan and all those people willingly laid down their lives for what they perceived to be the greater good, which is more than a bit of a stretch.

For an episode titled after Kory’s full name, Koriand’r offers scant extra focus on her, the revelations highlighting just how thin her backstory is and by extension how little scope there is for her continuing development. With only one episode left, there is a lot to do and very little time in which to do it to fully justify Titans as a mildly distracting but ultimately unfulfilling experience. 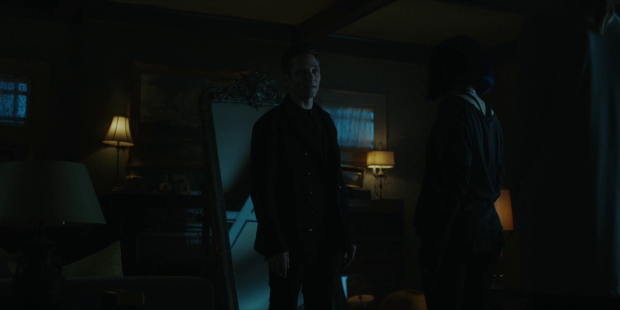 Koriand’r is an unsurprising backslide into Titan’s typical state of staggering mediocrity, once again dragging out a small amount of plot advancement to far too long a time, accompanied only by minimal character development. It does set things up for the finale, but the simplistic nature of what required to be put in place feels like we could have got here long before now.