Wandavision continues its progression through the decades of sitcoms with the 1970s and focuses on Wanda’s unconventional pregnancy.

Once again, Wandavision fully commits to the sitcom style in the way the episode is shot and presented with the writing and acting perfectly encapsulating how those shows were produced. As with the previous episodes the bulk of the episode is focused on the sitcom plot with clues sprinkled throughout as to a larger story playing out behind it. The whole show is a mystery that the characters are occasionally tangentially aware of but the beauty of it is that the focus is on having fun with the setup so any developments in the background mystery feel organic. 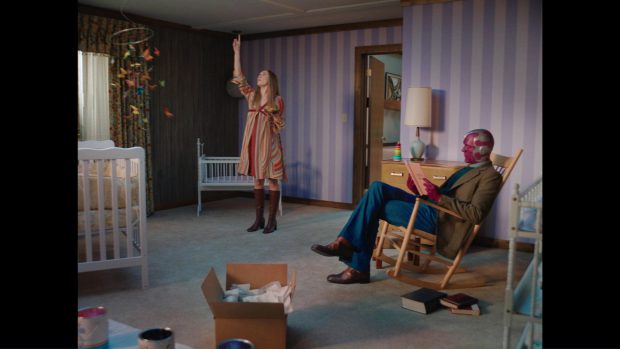 Pregnancy is a magical time

In this episode, Wanda’s pregnancy is progressing at a rate far faster than normal which should be more of a cause for concern than it is but thanks to the light sitcom backdrop it’s regarded as a charming inconvenience that can used to mine comedy. There are gags about how quickly it seems to have happened, confusion around how to deal with it and general communication mix ups between the expectant parents but none of it is taken that seriously as it’s just another wacky adventure as far as they’re concerned.

As with the previous episodes Wanda’s biggest concern is fitting in which proves difficult when a pregnancy runs its course practically overnight and activates Wanda’s powers in very obvious ways. Discussing how she feels causes those feelings to manifest physically in some way, contractions cause power outages, her water breaking causes pipes to burst and so on. These events act as a period appropriate reference to how something like this might be handled during the sitcoms of the period being presented but also act as a reminder of how powerful Wanda is and how difficult it is for her to control her powers. There have been numerous examples throughout the MCU movies she has appeared in of her powers being tied to her emotions and this episode supports that wonderfully. The indirect references to pregnancy stages with the burst pipes signifying the water breaking and the stork heralding the arrival of the babies made for some amusing touches but this episode more than the other two milked the gags for longer than was necessary. It could be my comedy preferences leading me to that conclusion but it was noticeable that some of the gags dragged on.

There is more forward movement on the notion that the world the show currently takes place in isn’t real. This is evident to the audience because of the way the altered reality is presented and evolves as the episodes progress but the characters are barely aware of it most of the time. One thing that remains unclear is how aware Wanda is of everything around her being false. There is a strong case for her having chosen to be a part of this fictional setting in the way she reacts to “Geraldine”. For the most part “Geraldine” appears to blend into her surroundings in the same way everyone else does but there’s a particularly interesting moment following the birth of the twins where Wanda breaks out of the sitcom persona to reminisce about being a twin herself. She references her brother Pietro -who was killed in Avengers: Age of Ultron– and appears to open up to “Geraldine” who directly references Ultron and causes Wanda to go on the defensive. Her sword -or is it S.W.O.R.D.?- necklace is identified by Wanda as a threat and she deals with it. 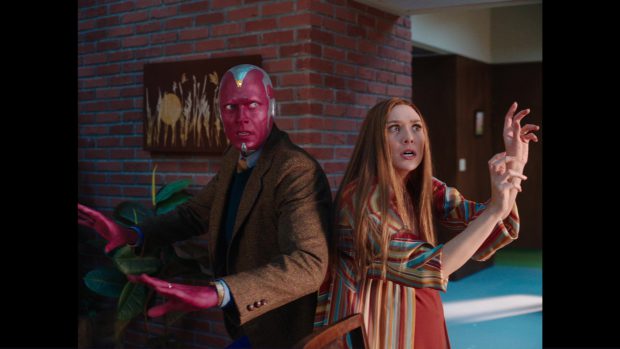 It’s a brief but vitally important exchange that raises a few questions. There is evidence so far that Wanda is being manipulated in some way and that all of this is being done to her but at the same time she has a lot of control over the world around her so it’s possible that she sees the situation as idyllic and wants to preserve that. It’s unclear whether the break in character is a deliberate choice on her part or if her twin children prompted her to snap out of whatever brainwashing has been inflicted on her long enough to remember her own past. Either way she’s clearly uncomfortable with the truth and would rather be rid of “Geraldine” than continue to think about it so she uses her powers to get her out of the way. Elizabeth Olsen’s performance as Wanda shifts from the comedic sitcom housewife persona to her true self is excellent and the unsettling way she delivers the explanation that “Geraldine” had to rush home to Vision was the right kind of eerie. Reality is definitely crashing into this strange fantasy but Wanda’s part in it remains unknown. The show does a good job of leaving Wanda ambiguous and for now waiting for the answers remains compelling.

The fantasy breaking down is supported in what Vision experiences when seeing Doctor Nielsen (Randy Oglesby) off. He mentions that small towns are difficult to escape and says it in such a way that there’s clear extra meaning behind the words. It’s enough for Vision to take notice and be drawn to Agnes whispering mysteriously to his neighbour Herb (David Payton). It turns out they’re discussing “Geraldine” who has been identified as an odd addition to the neighbourhood because she has no family or husband which Vision doesn’t see as odd but is forced to agree when Agnes points out that she has no home. All of this strongly suggests that the neighbours are also trapped in this altered reality and start to notice it when oddities are identified. “Geraldine” is such an oddity and it opens them up to the possibility that other things around them aren’t quite right.

It’s interesting that Agnes would be the one to lead Vision down this thought process as there have been hints that she is involved in shaping the reality in some way though that could equally be me reading into what I’ve seen incorrectly. This show does a great job of dropping ambiguous clues and it’s a lot of fun trying to decode them. The weekly format lends itself to this perfectly and so far the development of the mystery hasn’t been frustrating.

The ending of the episode where “Geraldine” finds herself thrown out of Westview and surrounded by men with guns, cars and helicopters confirms that the reality Wanda and Vision live in is a construct of some kind though it’s far from clear what the purpose is or who is behind it. Shifting to widescreen as the action progresses to the world outside the sitcom was a really clever touch as well. The episode does suggest that “Geraldine” made her way from the outside possibly to rescue Wanda based on her interaction but the fact she is regarded with hostility upon exiting it could indicate that there are multiple parties involved. The plot does certainly thicken. 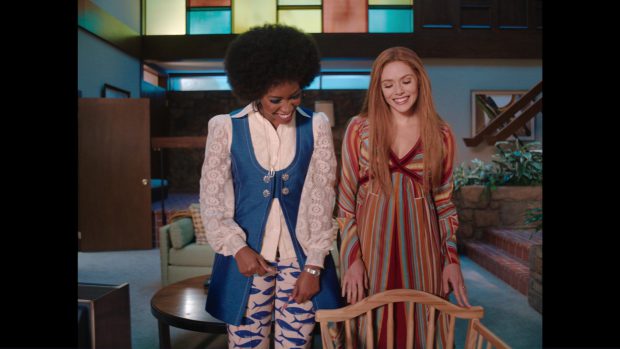 A strong episode that continues to entertain through the sitcom setup while developing the core mystery in really fascinating ways. As before the bulk of the episode is concerned with the sitcom plot with this one being Wanda dealing with her pregnancy. The stages of pregnancy trigger her powers in different ways that make for indirect references to what she’s experiencing. It works well enough though some of the gags do drag on for longer than they should. Her powers being triggered makes good use of the style of the era of sitcoms the show is referencing while serving as a reminder that Wanda’s powers can be dangerous and that they are tied to her emotions. Once again Wanda’s goal is to fit in which proves difficult considering how unpredictable her powers are so the characterisation is consistent.

The reality surrounding them breaks down in different ways. “Geraldine” is the element that prompts the breaking of the fantasy such as when Wanda snaps out of the sitcom persona when reminiscing about her dead brother Pietro. She identifies “Geraldine” as a threat when she references past events and deals with that threat accordingly. Elizabeth Olsen’s performance as Wanda snaps out of the sitcom persona is excellent and the unsettling delivery of the line around “Geraldine” having to rush home is the right amount of eerie. It remains ambiguous as to whether Wanda is complicit in the reality around her or if it is being done to her and she sees it as ideal. Vision is also prompted to be suspicious of “Geraldine” in a way that suggests the others in this reality are trapped there and become aware of that whenever oddities are presented to them. The ending throws up even more questions around how many parties are involved so there’s a lot to consider.