HBO’s new sci-fi drama Westworld hasn’t had a quiet production history. Like the gunslinging pings and echoes of the Wild West, it has come out of the gate shooting, with a mix of both high expectations and slating complaints of unnecessary nudity and violence from the extras of the show. Ever since the release of Game of Thrones, the commercial consumption of nudity is hot topic and HBO is at the epicentre of it, relentlessly serving hungry audiences their pounds of flesh (and blood). So it should really come as no surprise that showrunners Jonathan Nolan and Lisa Jay Nolan have spent most of their press time explaining away the shock-value in the show’s pilot, “The Original”.

After the opening credits (think House M.D. and American Horror Story had a baby), one might think that we’ve been dropped straight into the world of Ex Machina, as we’re confronted with a dream-like interrogation of Westworld’s central protagonist Dolores (Evan Rachel Wood). Straight away Westworld acknowledges that, unlike the inhabitants of its Western themed theme-park, it is not alone in the world. The show actively riffs on a whole bunch of sci-fi and horror tropes, referencing not only the 1973 Michael Crichton movie (of the same name) that it was based on, but numerous other recognisable movies and shows. The Candyman-esque fly-over-the-eye that the opening takes a fixation to is just one of these cheeky references (and one that is satisfyingly nodded to at the end of the episode). 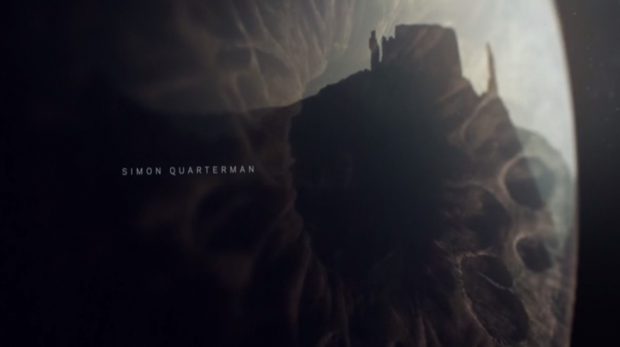 I’m not the only one who sees the resemblances to certain other popular shows, am I?

The general idea of the show is revealed in timely fashion. Rich guests of the future are able to attend an ingenious (and kind of sick) Western theme park where all of the inhabitants are synthesised humans, built to enact storylines which the guests can partake in. So far, so 1973. However, unlike the original movie, the show focuses much less on the guests than on the synthesised “hosts”, swapping back and forth between the apparently pre-destined story arcs of the hosts and the human creators behind the scenes. I say “apparently” pre-destined because “The Original” sets up one major disturbance: After a new upload to the hosts, some begin exhibiting abnormal behaviours – everything from a technically harmless killing spree (hosts can hurt each other but not the guests), to the more intriguing factor that one of these synthetic beings is beginning to work out just who, or more precisely, what he is. 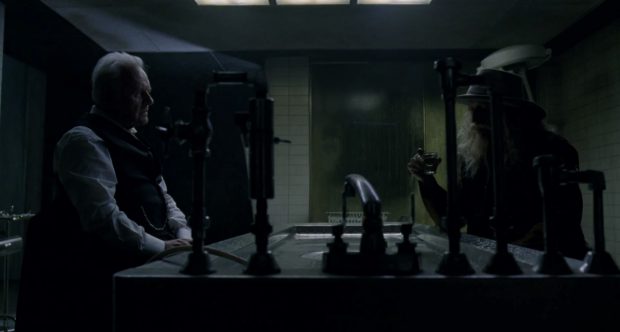 The good doctor and one of the “hosts” have a chat

The audience is entreated to root for this kind of awakening, despite the repercussions it could have for the humans involved. The show, as promised, is filled with a violence that is chilling for reasons other than its graphic nature. Unlike most shows, Westworld is able to re-use its characters, the hosts being repaired and wiped for the next day with the guests, which means that, no matter the horrors that face them the previous day, they can be relived again and again at a guest’s will the following days. It’s a gut-churning thought and one that we’re faced with within the first part of the episode as the sweet (if frustratingly helpless) Dolores sees her lover (James Marsden – you’ll recognise him from X-Men), beloved father and family murdered, before she is raped by the villainous Man in Black (played by the ever-captivating Ed Harris). The next day however, she has no memory of the incident and greets him with a smile as he helps her pick up groceries. It’s a moment that sickens the viewer to the stomach and there’s no qualms as to who we are rooting for here (Hint: It’s not the psycho Gunslinger whose aim is yet unclear, besides the fact that it includes murder, rape and torture of the hosts). We live in a post-humanistic society in our media today, so much so that we’re almost coming back round on ourselves and thinking, perhaps, is the post-human just as human as we are? The kind of self-loathing in humanity whenever the created Other is involved has been the subject of debate ever since the idea of the Human God came into existence. It’s the age old question: Is Frankenstein the man, or the monster? 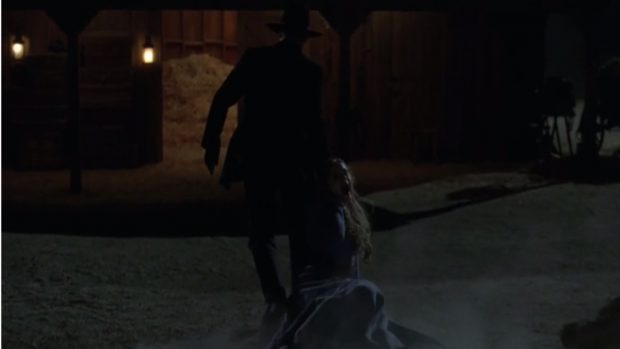 Unfortunately, this being a HBO show, I really don’t think that this is the darkest it’s going to get…

On the note of humans, the flip side of the show is just as interesting. While the theme-park narrative takes some time to really get on its feet and compel us, the Hunger Games/Cabin in the Woods-esque behind-the-scenes view of the park is instantly interesting. Bernard Lowe (Jeffrey Wright) is the head programmer at Westworld, meaning that it’s his job to deal with the glitching, updated hosts (along with Sidse Babett Knudsen’s no-nonsense stereotype Theresa Cullen and Simon Quarterman’s whiney-corporate-jerk Lee Sizemore). The creation aspect of the park is fascinating and Wright in particular is a breath of fresh air in the unrelenting misanthropic tendencies of the show. The real joy however is Anthony Hopkins as Dr Robert Ford, the park’s original creator. Reminiscent of Richard Attenborough’s John Hammond in Jurassic Park (ironically, a book that was written by Michael Chrichton), Hopkins has all the best lines in the show, mixing wonder for the striving of man with a bone-deep tiredness of its conjoined folly. In a moment of reflection on the ability to create the hosts, the good doctor comments “It means [humanity] is done. It’s as good as we’re going to get”. A chilling thought. Once man becomes God; where next? 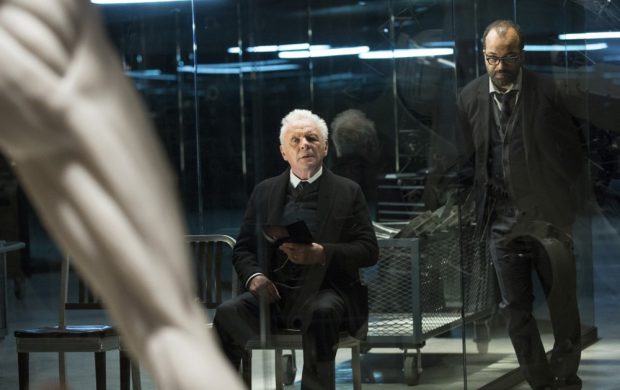 The blend of the two worlds presents a complex conundrum to open the season to. Questions of the uncanny abound, the nature of what is too human, too life-like to treat differently from ourselves. But the hosts reflect also on the robotic lives of the humans. Another day at work, another day to please the guests: In the park the humans behind the scenes are similarly beholden to their paying masters, but in a much less violent and overt context. And even the viewers are questioned: Would you attend such a theme park? They’re not easy questions to answer.

Some questions, however, aren’t so artfully dealt with. The discourse on sexism, promised by J.J. Abrams in response to concerns over the show’s nudity, have yet to surface. While the struggles and trauma of the women in this narrative are enacted both physically upon their bodies and allegorically in a storyline where beings are built, unable to resist, to please another, the resistance of women seems to be found in very small quantities indeed. Besides the stereotypical ball-busting, all-business figure of Theresa Cullen, it seems that the only women with any agency, thus far, are those that sell their body for sex. Not particularly inspiring given Abrams’ already patchy track history with female representation. The show has a lot to offer in its discourse for future post-humanity and bio-engineering, but perhaps less about the current climate.

“The Original” has a lot to say and it says it well, simmering for a good while before boiling to a fantastic, climactic third act. There is always a danger with a show like this that the discourse can become stale and, without a steady hand on the wheel, the plot can quickly follow. However, Westworld delivers a solid hour of hope for a good season ahead (if a little less hope about the good of humanity).