“…Captain Carter Were The First Avenger”

The Marvel Cinematic Universe delivers its first animated project with What If…?; the first outing featuring an alternate scenario where Peggy Carter is given the Super Soldier Serum instead of Steve Rogers.

Alternate takes on established events is always going to be of interest to viewers. Star Trek captured audiences with an alternate universe where everyone was evil and Spock had a beard, the Arrowverse continues to play with the Multiverse concept to showcase different possibilities and a number of other examples exist where writers have played around with different versions of familiar setups. In the comics, “What If” started out as being a fun way to let events play out differently without affecting the main continuity. “What if Spider-Man joined the Fantastic Four?”, “What if The Avengers fought Galactus?”, “What if Captain America hadn’t vanished during World War II?” are just three of the stories those comics explored early on. To my mind they were fun but always played out in really extreme ways because the writers knew whatever they did would have no impact on the main continuity. This made many of them seem overly ridiculous though they were usually very entertaining. 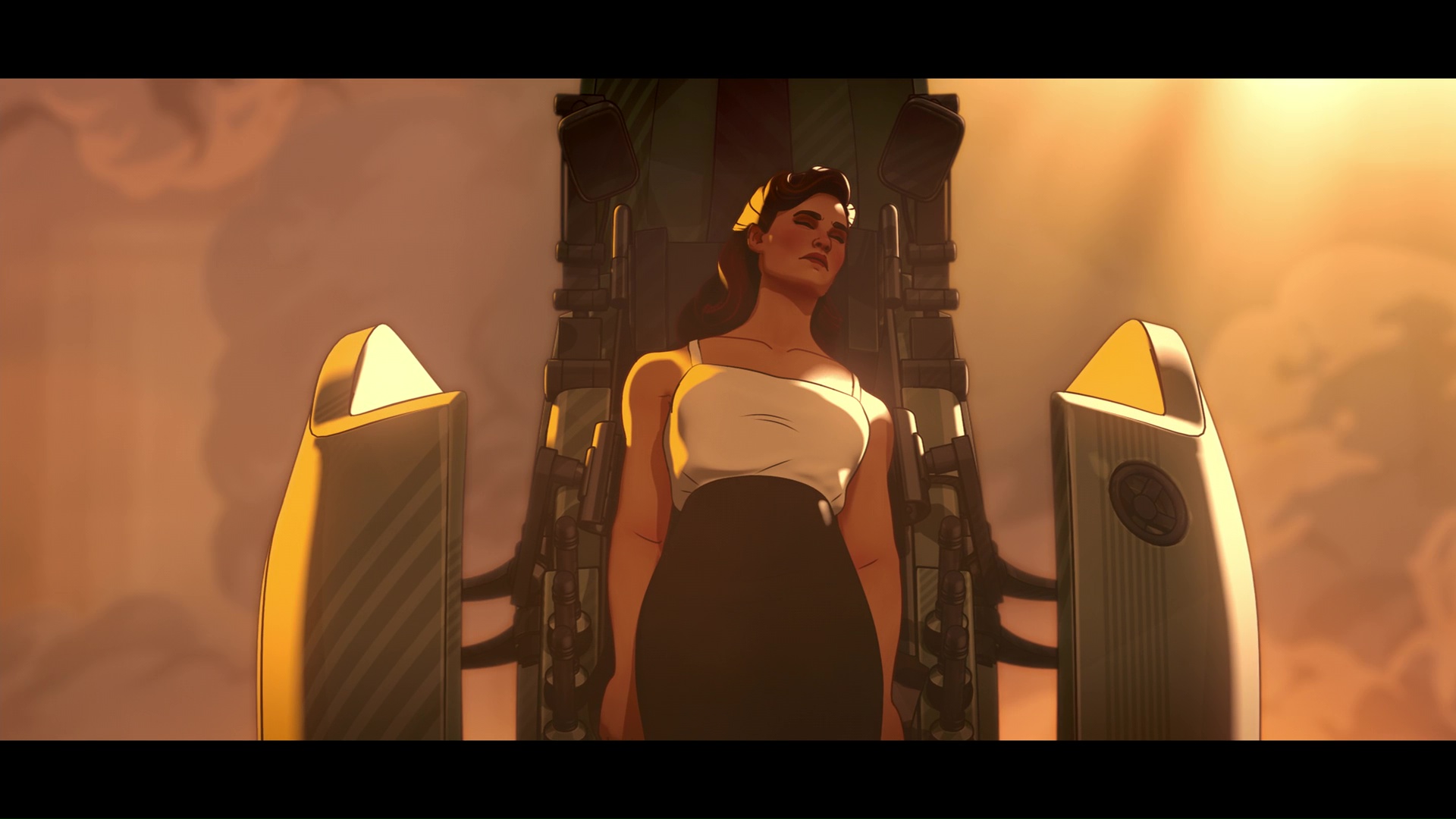 It’s unknown at this point whether the MCU What If…? will end up having any connection to the wider universe. It’s certainly possible given the recent strong suggestion of a Multiverse -along with the mention of the Multiverse in the opening moments of this episode- and this episode does suggest that bringing these characters into the main continuity in some way is at least in mind. There’s no reason not to do that as long as the story is good and the contribution is meaningful.

What If…? will be connected through Uato The Watcher (Jeffrey Wright) who oversees the Multiverse and explores these alternate takes. If this show is simply to be a procession of alternate stories that exist simply to be told then using Uato as a framing device to meaningfully connect them in a small way is a good idea. His contribution to this episode is very minor though he does highlight that he won’t interfere which hints at the possibility of that mindset changing at some point. My view is that the alternate events will start to connect as the show goes on and there will be a more tangible tie to the main continuity. It’s likely that something will happen that forces Uato to make the choice to interfere which will further complicate the fragile balance that exists in the Multiverse. That is mere speculation on my part though as there isn’t enough evidence to point in either direction for now. Either way it’s an interesting premise and this is a great example of how compelling the concept can be.

As mentioned, the alternate scenario playing out is Peggy Carter (Hayley Atwell) being given the Super Soldier Serum instead of Steve Rogers. The catalyst for this happening is Peggy choosing not to watch the procedure from the booth. This somehow prompts the Nazi spy to attack prior to the procedure taking place which results in Steve being shot and Project Rebirth risking complete failure if someone doesn’t step in immediately. Howard Stark (Dominic Cooper) is the preferred choice but he’s someone who would rather work behind the scenes so declines. Peggy volunteers herself without hesitation and the serum enhances her just as Steve Rogers was in the main continuity. I suspect this will be indicative of what many of the episodes of this show will deliver; the idea that one small seemingly insignificant choice can result in major change. A common conclusion in the exploration of alternate scenarios is that making different choices doesn’t necessarily result in things being better. That isn’t the message in this episode but if Captain Carter’s universe returns then it could prove to be the case. 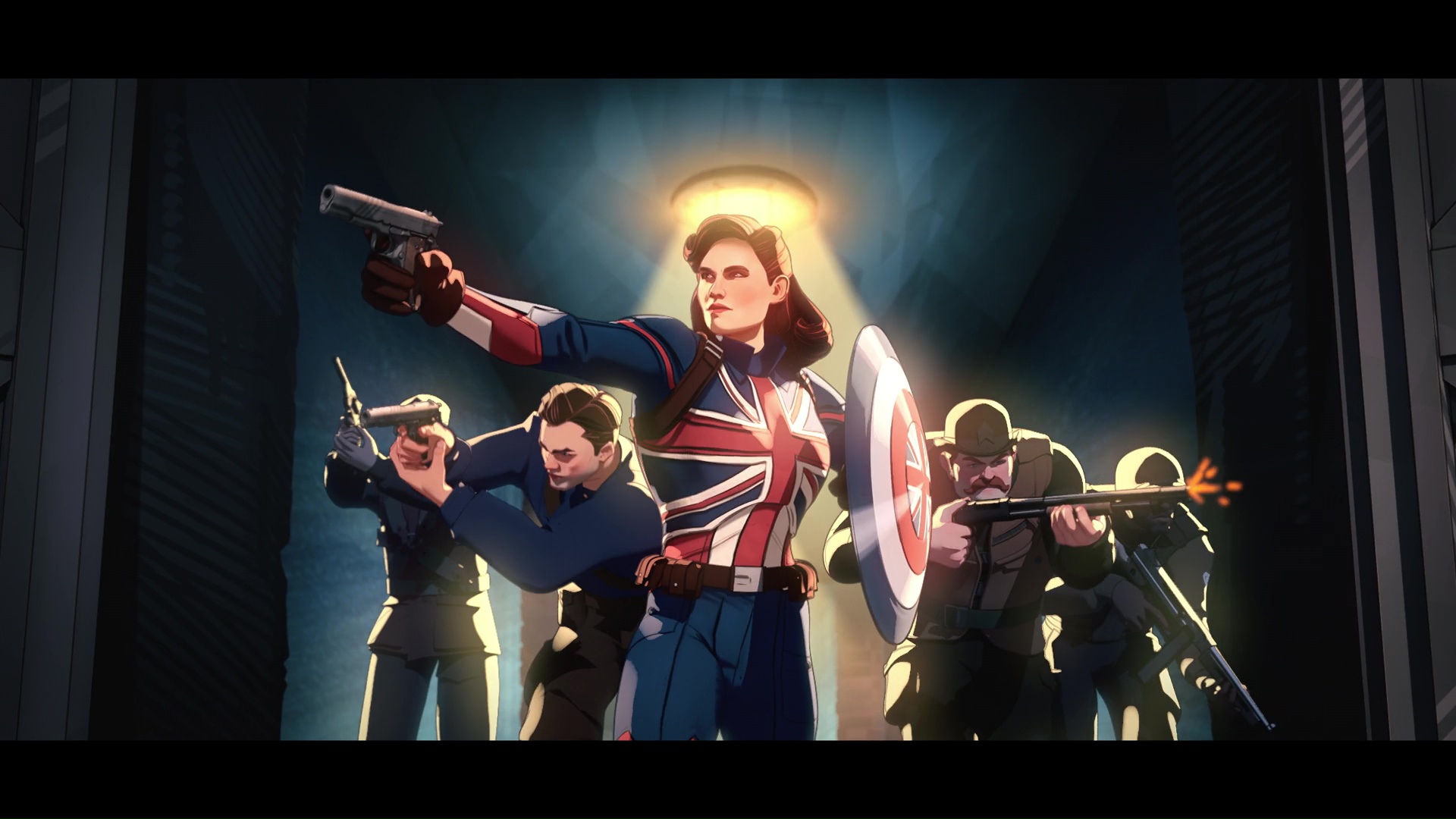 Much of this episode is essentially a condensed alternate take on Captain America: The First Avenger with Peggy in Steve’s role. The episode is far shorter than the movie it branches out from so the story is told very quickly. It’s entertaining but the brief time frame is sometimes to its detriment as things happen without much detail associated with them. Howard Stark decides to make a costume for Peggy as well as the famous shield but it’s not clear why he would choose that shield specifically considering the reason Steve wielded it was because he was immediately drawn to it in the movie. There’s no reason given for Stark opting to give that to Peggy but it happens because the Captain America iconography has to be altered to suit Captain Carter. Similarly Zola is captured far earlier than he was in the main continuity while having the Tesseract on him without really explaining what changed to allow that to happen. The Red Skull is barely a presence and the wider context of HYDRA, the Nazis and World War II are practically an afterthought It’s easy to brush aside by accepting that Peggy being in Steve’s role is influencing the events around her and having knowledge of the film this spins out from will help audiences fill in the gaps but the speed of the storytelling is somewhat jarring.

This does affect the issues that are touched on but never properly covered. An obvious one because of the era is gender inequality. Even though the Super Soldier Serum worked as intended Peggy is still initially dismissed because she’s a woman. It’s unthinkable that she would fight in the field or represent the U.S. Army in the war effort in any way. It is seen as a disappointment that the only output from Project Rebirth was her and Peggy clearly feels marginalised as a result. It is quickly cast aside when she proves herself in the field and she later talks about how she has gained acceptance as well as respect because of what she has accomplished so far. Of course it would never be within the scope of this episode to cover her ongoing influence on women’s rights following the War but the coverage the issue receives in the context of what is shown is minimal. It’s brought up and resolved far too quickly.

One thing that doesn’t suffer is the Peggy and Steve relationship. The changes to the events highlights how pure their connection was and that Peggy was drawn to him because of who he is rather than what he could do. Josh Keaton takes on the voice of Steve Rogers in this and does a commendable job of sounding enough like Chris Evans to be believable as the same character while putting enough of his own stamp on the voice to deliver the necessary emotional heft. Steve’s bravery and innate good nature is highlighted through the way he behaves whether that be willingly manning a mechanical WWII era Iron Man suit to back Peggy up in the field or keeping her grounded by talking to her as a person rather than a legendary soldier. The attempt to inject the tragedy into them being forced apart by Peggy’s sacrifice doesn’t quite work but the moments they share prior to this point are very strong and provide a meaningful different take on the storied Steve/Peggy connection in the main continuity.

Peggy as a character is changed by the serum though not significantly. She is as confident and determined as she ever was but there’s an air of overconfidence about this version that wasn’t present in the other one. The main continuity Peggy was often very careful and deliberate in her approach to situations where this version is reckless. This makes sense given what she can do and how frequently she succeeds. It is never positioned as a negative trait as her recklessness always pays off but it’s a notable difference that allows this version to come into her own. She’s still recognisably Peggy but circumstances have played a part in shaping the person she is just as they do with everyone. This shows a strong grasp on character work even with a very brief window to showcase it. 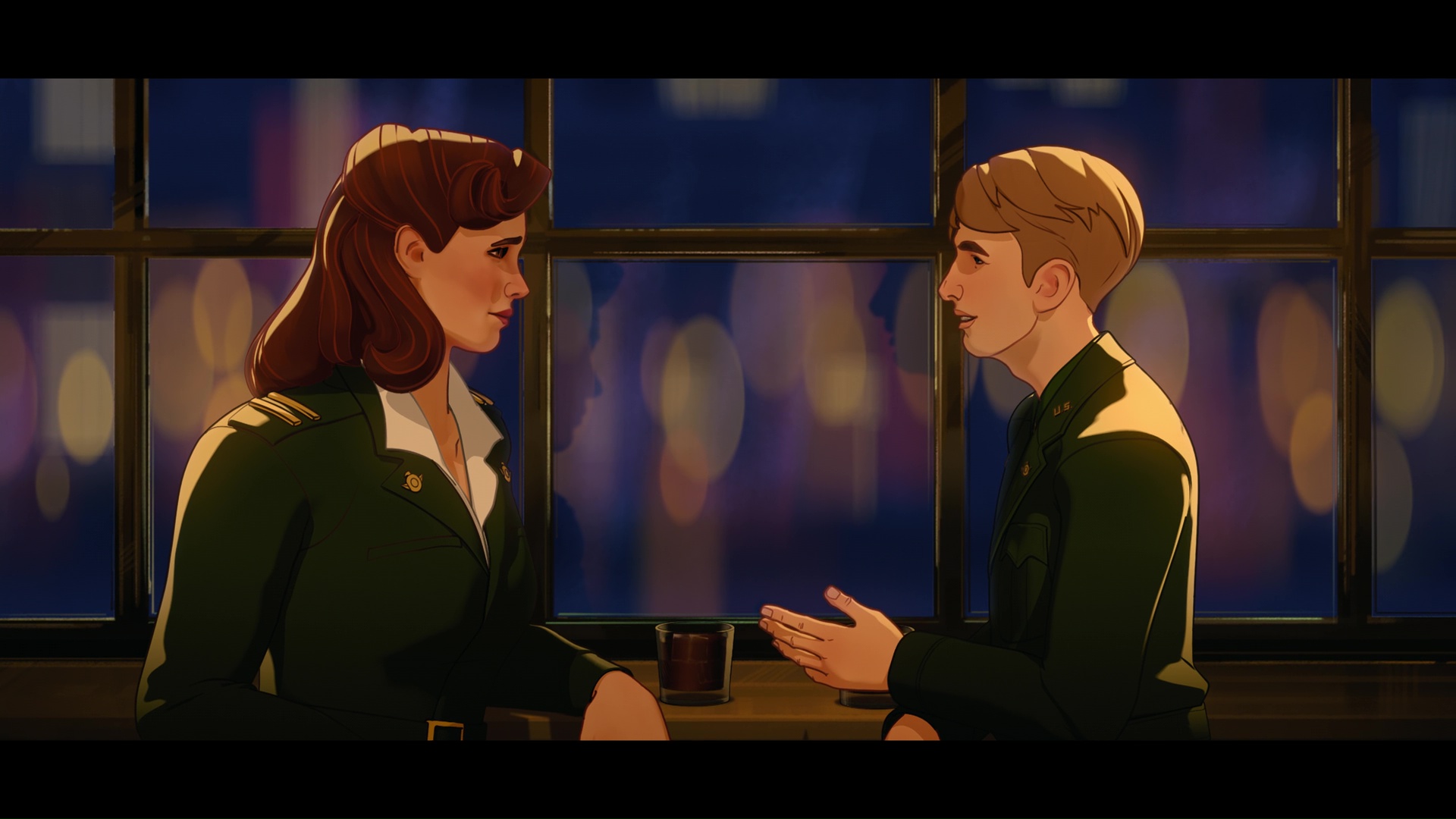 A strong showcase of the concept with an entertaining alternate take on Peggy Carter and the events of Captain America: The First Avenger. Using Uato the Watcher as the connective tissue for all of these alternate takes is a good idea while hinting that he will be more than an observer as things progress. The speed of the storytelling is very jarring with events playing out without much detail associated with them. Audiences will be able to use their knowledge of the film this spins out from to fill in the gaps and accept that Peggy being in Steve’s role influences events but the storytelling is still too quick. This also affects the gender equality issues that are touched on but never properly explored. They are introduced and resolved without any real coverage.

One thing that doesn’t suffer is Steve and Peggy’s relationship. The changes to the events highlights that she was drawn to him because of who he is rather than what he could do. The tragedy of them being separated by her sacrifice doesn’t entirely work but the moments they share prior to this are very strong. Steve as a character is well served with his innate decency and bravery being showcased. Peggy is changed as a character by the Super Soldier Serum not not entirely. She’s as confident and determined as she ever was but also has an air of overconfidence brought on by her capabilities. She’s far more reckless which always pays off but is recognisably Peggy. This shows a strong grasp on character work even with a very brief window to showcase it.