What If…? goes back to the very beginning of the Marvel Cinematic Universe but diverts from the events of Iron Man with Killmonger rescuing Tony Stark before he could be taken prisoner.

Necessity is the mother of invention and at least part of this episode is about that. The unique set of circumstances that Tony Stark (Mick Wingert) found himself in inspired him to create a powered suit of armour as a means of escape. It was an ingenious and off the wall idea that completely paid off before setting him on the familiar course through the MCU as depicted in the films. 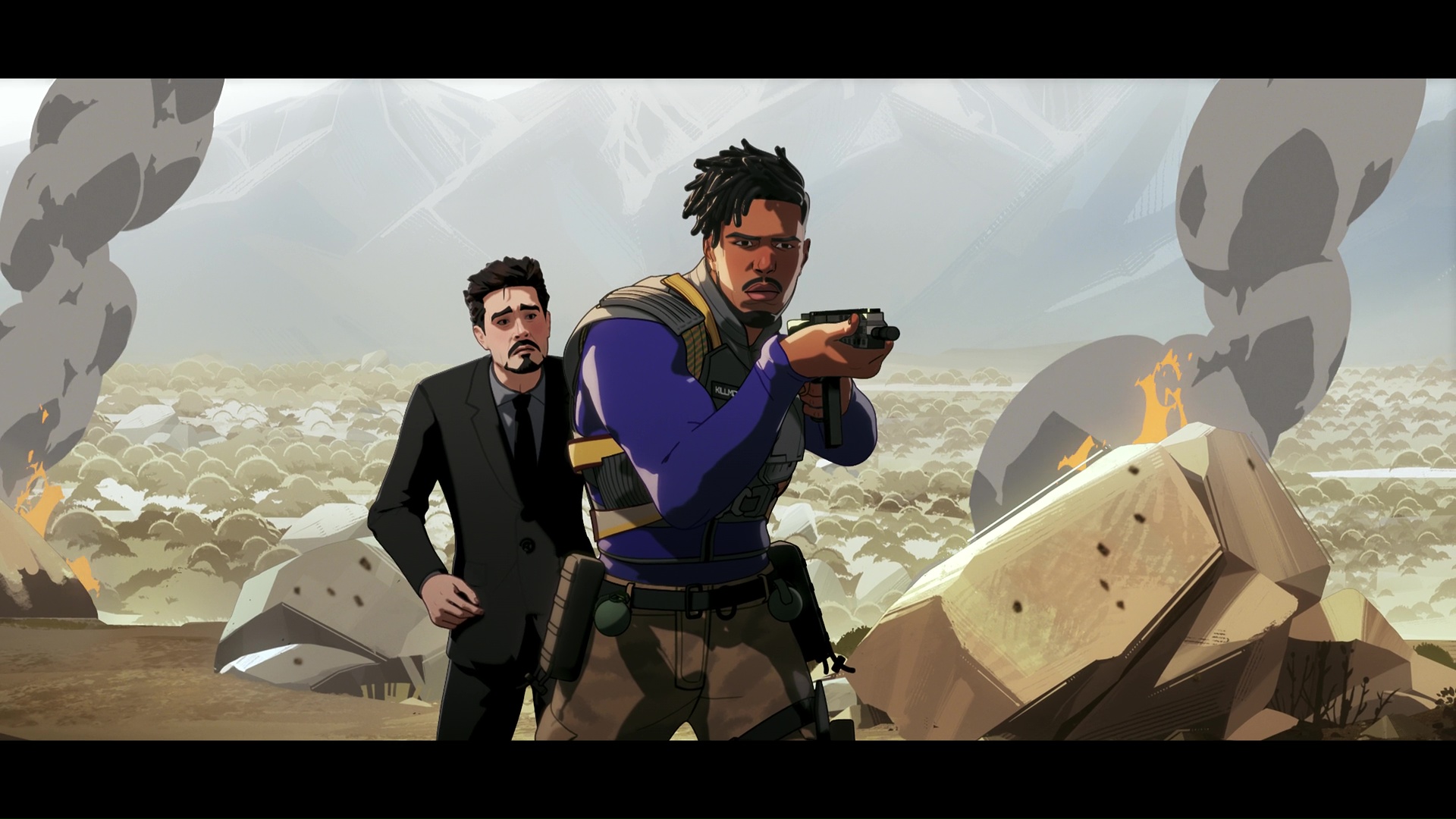 Different but is it better?

The divergence happens immediately when Killmonger (Michael B. Jordan) throws the bomb away that would embed shrapnel into Tony Stark’s chest and takes him to safety. From there things change massively when Killmonger outs Obadiah Stane (Kiff Vandenheuvel) as being part of a conspiracy to kill Tony Stark during a press conference which neatly solves that problem in an impressively succinct way.

Early on the episode drinks in the fact that Tony Stark never learned the life lessons during his incarceration which means he wasn’t inspired to be a better person, didn’t work obsessively on Iron Man suits, never became involved with S.H.I.E.L.D. or the Avengers along with a whole host of other important events that are well known. Instead he remains the self absorbed manchild that was depicted early in the first Iron Man film and finds himself manipulated by someone far more shrewd than is.

What this episode gets right it Killmonger. He’s an excellent character with a wide range of skills that he deploys expertly in any given situation. He can navigate the life of a soldier, the corporate world and the political landscape to manoeuvre events in his favour. As in Black Panther he has revenge on his mind and wants to to make Wakanda pay for what they did to his father. That doesn’t come into play until a lot later but the episode does an admirable job of joining everything up to make it fit naturally. Killmonger being the central figure throughout helps with this. 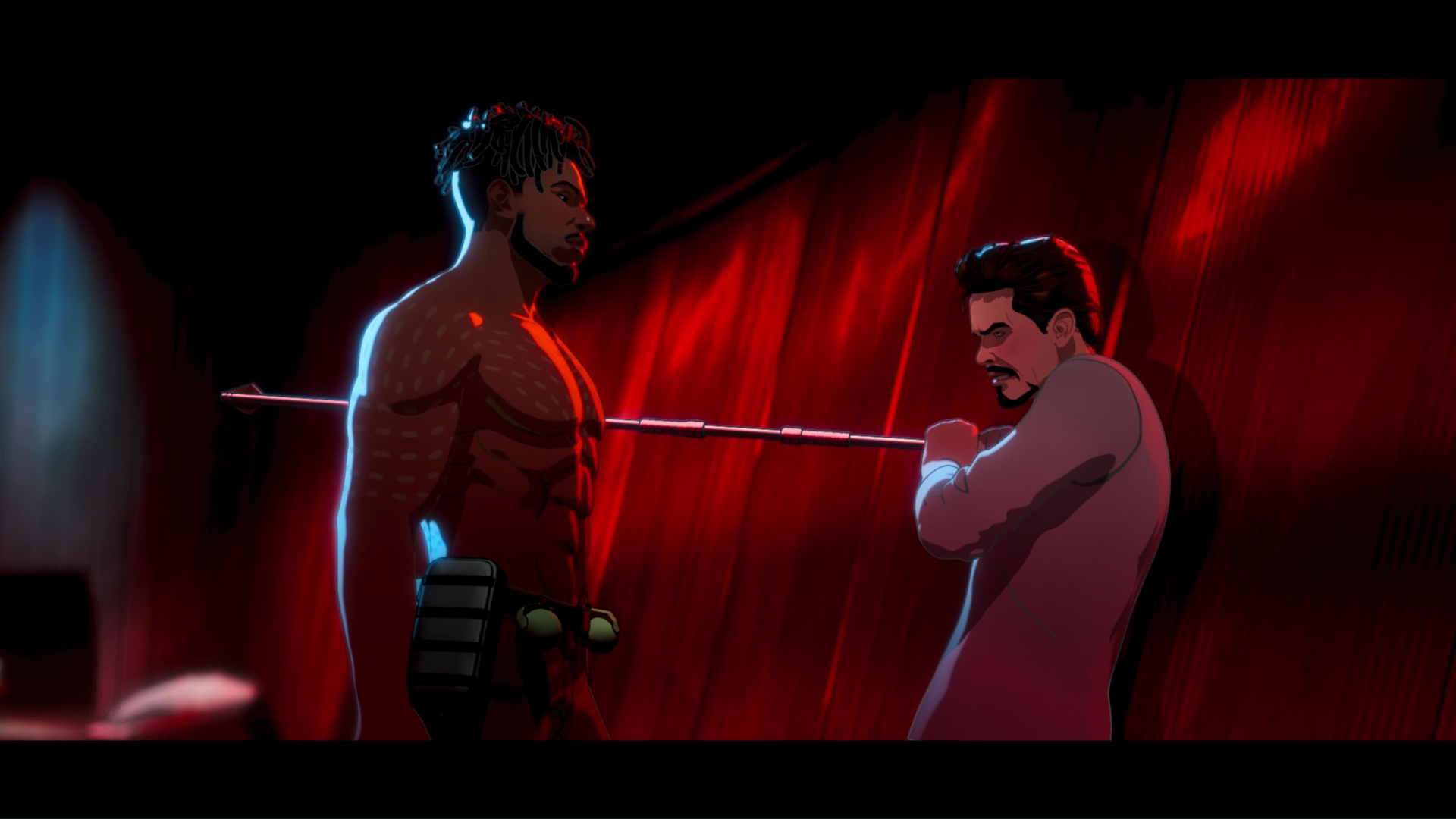 Tony Stark will not return in The Avengers

The dynamic between Stark and Killmonger is engaging to watch. Stark is well established as being the smartest person in the room while also assuming that nobody else equals him in intelligence. He has been guilty of assuming that his considerable resources give him an innate advantage that can’t be overcome before being proven wrong. In this case he assumes that he’s in control of his relationship with Killmonger because he supplies the money and the tech to build his anime drone project. It doesn’t occur to Stark that he’s playing into Killmonger’s hands because he is so blinded by the fact that he solved a lot of problems.

Naturally this proves to be his undoing when Killmonger murders T’Challa (Chadwick Boseman), Rhodey (Don Cheadle) and Stark himself in order to engineer a War between the United States and Wakanda. This basically puts everything in place for Killmonger to return to Wakanda, reveal his parentage and ingratiate himself in the society that cast his father out before killing him. It works like a charm with him being accepted by T’Chaka (John Kani) who has no idea that his son was killed by Killmonger. The episode ends with Killmonger right where he wants to be, given the mantle of the Black Panther and ready to get his revenge.

It’s a common complaint by me for episodes of this show at this point but the storytelling happens so quickly and tries to cram far too much into a very small running time. In this case the episode suffers by feeling like a procession of events with very little depth to them. There’s no time for the Stark and Killmonger relationship to be properly explored because the plot needs to keep moving. What we see is engaging but there was definitely more that could have been done. Similarly more could have been done with Killmonger’s arrival in Wakanda by having him meaningfully interact with his family to further build the tension associated with his decision to betray them when the time is right. It’s fine as is but it lacks in weight and that drags the episode down because of the obvious potential. Other questions can’t help but creep in such as why S.H.I.E.L.D. aren’t involved at all or what impact the events of films like Thor or The Incredible Hulk have on this story considering aspects of them probably wouldn’t be altered too heavily by these alternate events 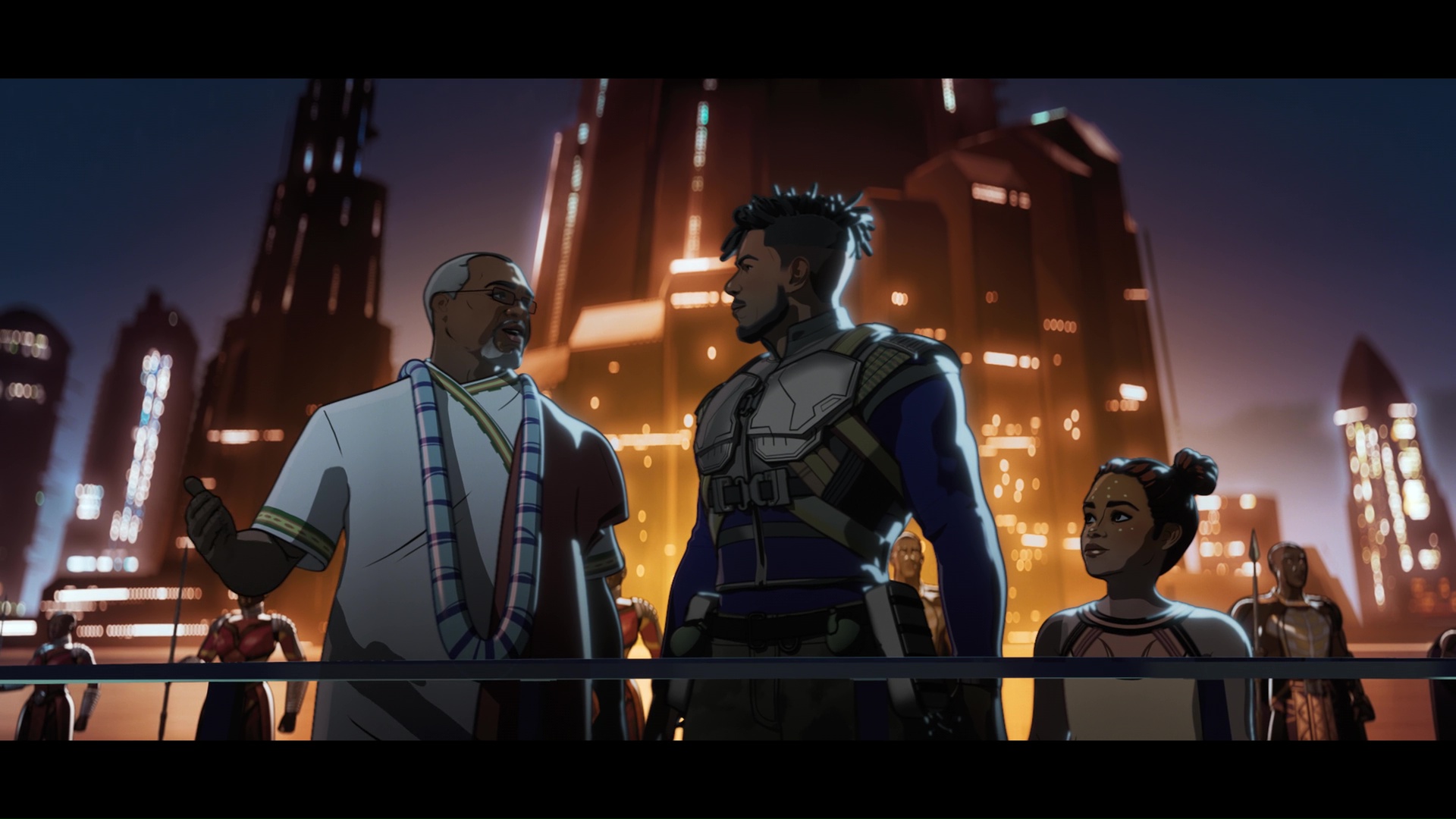 All part of the plan

Another issue is the ending, or more accurately lack of one. The chosen end point feels like less of a conclusion and more the end of the first act of a continuing story. It’s unknown at this point if there are plans to do sequels to any of these episodes but even if there were then it wouldn’t prevent the ending of this one from being unsatisfying. It ends with Killmonger ready for the next phase of his plan as Shuri (Ozioma Akagha) enlists Pepper Potts (Beth Hoyt) to help stop him as a hint of hope for a better outcome. There’s the suggestion of more to come but it ends in a less than conclusive way which is incredibly jarring.

It doesn’t totally lack in depth. As with Chadwick Boseman’s prior voice work on this show there’s extra meaning associated with his contribution particularly with his casket being seen and his appearance as a spirit at the end of the episode. T’Challa speaking from beyond the grave takes on additional significance because of real world knowledge and within the context of the episode itself his inclusion is meaningful however brief. There is also an odd aside where Killmonger and Rhodey briefly discuss their stances on the military with Killmonger voicing his discuss that a black man would wear the uniform of his oppressors. Rhodey’s argument is that the system needs to be changed from within but Killmonger’s stance is to tear the system apart and rebuild it in his image. He has similar contempt for Wakanda being so passive as black people the world over continued to struggle. This was well developed in Black Panther and is strongly conveyed here in a very different yet equally relevant way. More time could have benefited the episode greatly but this was a compelling alternate exploration of a villain’s rise to power. 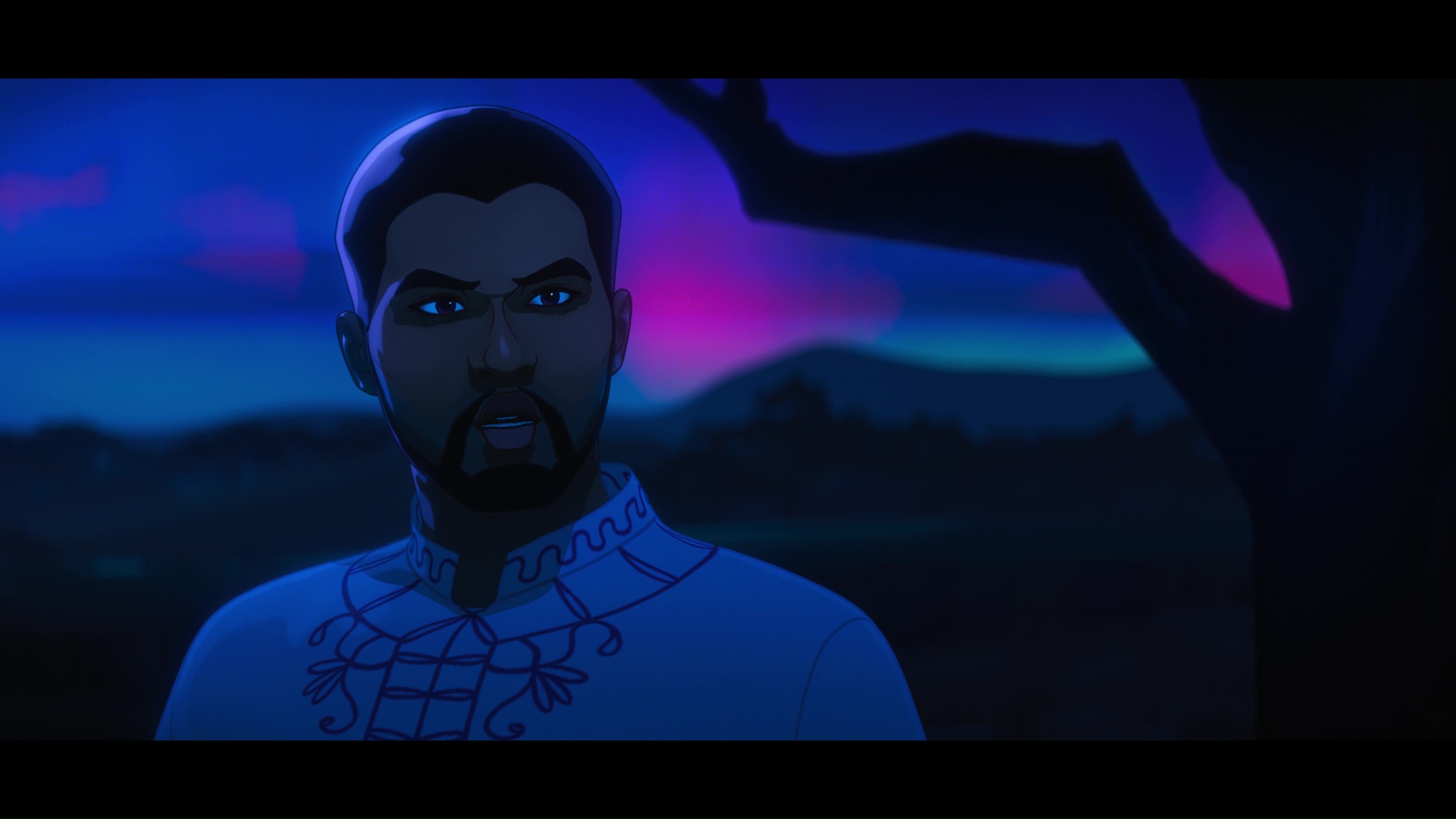 Right in the feels

A compelling alternate exploration of a villain’s rise to power that makes great use of the central character. Killmonger is a great character with a wide range of skills that he expertly deploys throughout. His manipulation of a Tony Stark free of the harsh life lessons learned in an Afghan cave makes for engaging early viewing and showcases Killmonger’s ability to control a given situation. The episode does an admirable job of joining up the Tony Stark part of the plot with the later addition of Wakanda through keeping Killmonger the central figure throughout.

As with prior episodes the speed of the storytelling is the problem. There’s no real time for depth in given moments which makes the episode feel like a procession of events. What is shown of character relationships is engaging but there’s insufficient time to really explore these dynamics. The lack of an ending is another problem with the episode ending on a less than conclusive and jarring note that suggests more to come. There is some depth to be found such as the extra meaning added to Chadwick Boseman’s contribution as T’Challa particularly when he talks from beyond the grave. It’s something that works well in context as well. Killmonger’s brief discussion with Rhodey about their views on military service is interesting but far too brief and Killmonger’s contempt for Wakanda is well established in a very different way to how it was depicted in Black Panther. More time could have benefited the episode greatly this was a compelling alternate exploration of a villain’s rise to power.