“…The World Lost Its Mightiest Heroes?”

What If…? continues with a murder mystery built around an alternate take on the early days of the MCU.

It feels like such a long time since the MCU was building up to the formation of the Avengers with solo films setting up the individual characters. It’s easy to forget that the events of Iron Man 2, Thor and The Incredible Hulk were overlapping because the connections between them were very much in the background but this means that those three films are fertile ground to tell a story that weaves between them. Of course What If…? is all about telling a story that differs from what was depicted but using those three films as a starting point is a strong idea. 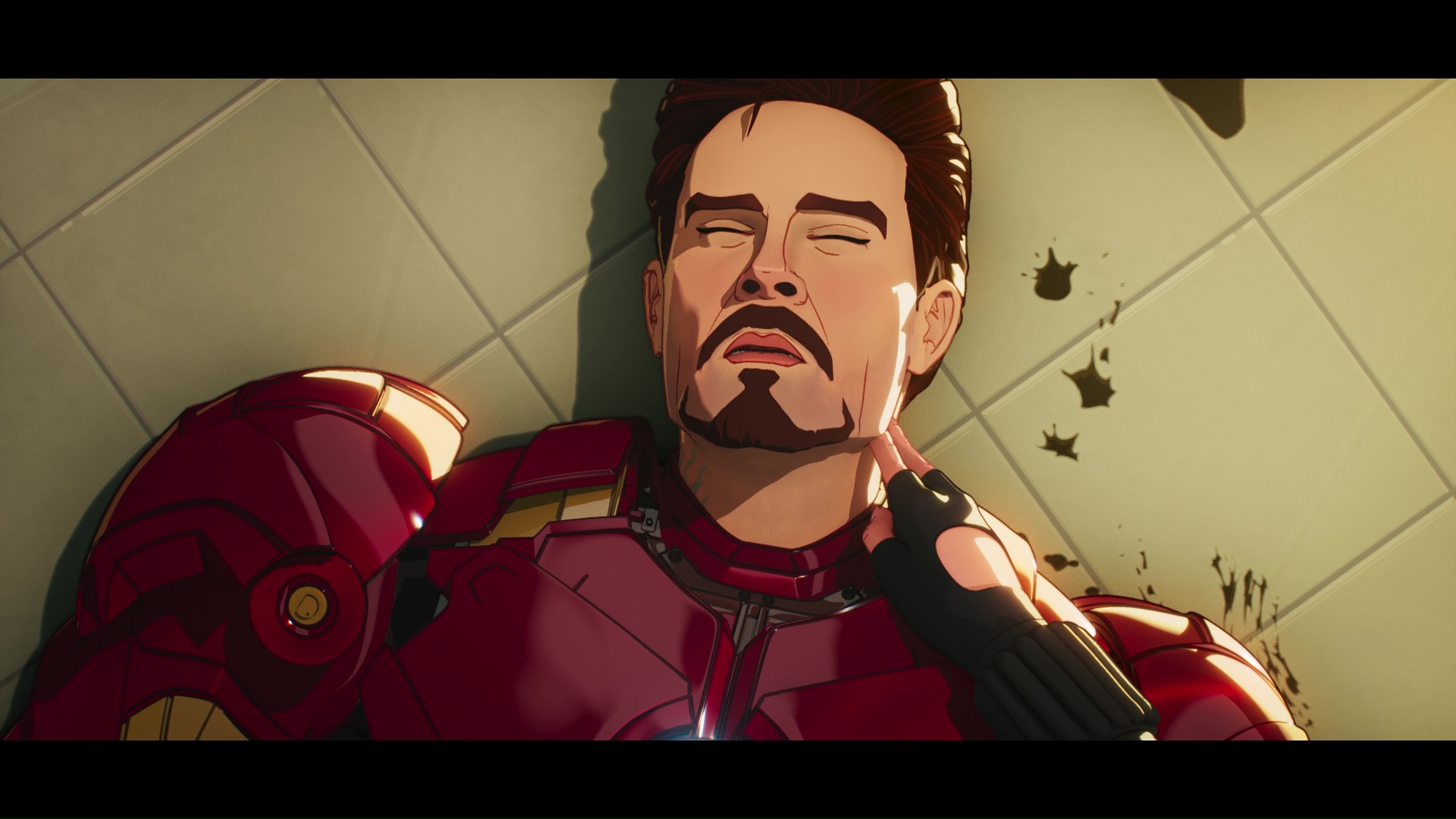 That’s not supposed to happen

The episode begins with a riff on the section of Iron Man 2 where Tony Stark (Mick Wingert) has gone completely off the rails and Nick Fury (Samuel L. Jackson) has to step in to deal with him. This is where Natalie Rushman is revealed to be Natasha Romanoff aka Black Widow (Lake Bell) and the film plays out from there. The key difference is that Tony Stark dies when injected instead of having the symptoms he’s experiencing abated. Natasha is blamed for murdering him and the alternate plot kicks into gear.

A lot of impressive character work is accomplished very early on in this episode. Right from the beginning a strong sense of Natasha as someone Fury trusts is established which is continued when he automatically assumes that she isn’t responsible for Stark’s death. He also believes that she’s the best candidate to solve this mystery so engineers a situation where she can escape and do what she does best by working the case covertly. It’s important in these short episodes to impart necessary information quickly and through a few choice lines of dialogue shared between these two characters it accomplishes exactly that.

The mystery deepens when Clint Barton aka Hawkeye (Jeremy Renner) puts an arrow in the depowered Thor and kills him. He insists that he didn’t consciously fire the arrow and has absolute confidence in his ability to know that he doesn’t miss. It isn’t long until Hawkeye himself meets his end and a pattern starts to reveal itself. Someone is going after the candidates for the Avengers Initiative so whoever is behind it doesn’t want the Avengers to be formed. The episode is at its strongest when focusing on the mystery with it building naturally as more developments play out. 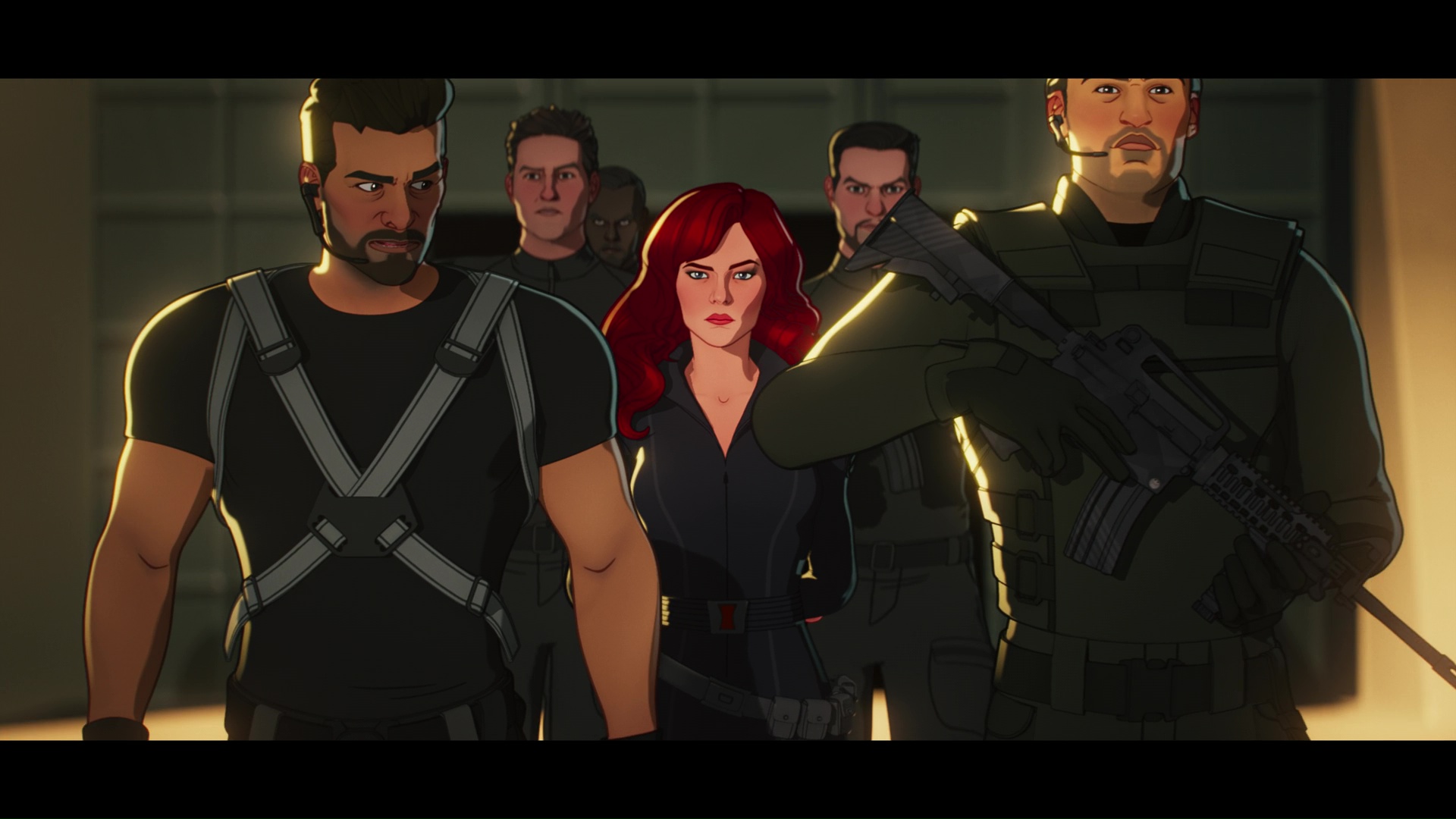 This will never last

In theory this is a Black Widow story with her operating in the background to try and figure out the answer to this mystery though that’s also where the episode lacks in focus. There is a lot of attention on Black Widow early on that highlights just how good she is at what she does but there is far too much cutting to other elements to provide the detail on Natasha’s skills and intelligence that the episode needs. There are scenes featuring Fury designed to tie the episode together and scenes featuring Coulson (Clark Gregg) because he was around at the time which is fine for context but it would have been better served as a vehicle to showcase Natasha’s skills as a spy. A problem is emerging with this show with the time not being used as effectively as it could be meaning that it fails to tell a complete story. In this case it bites off far more than it can chew and it shows in how quickly everything progresses.

Things escalate when Bruce Banner aka the Hulk (Mark Ruffalo) is killed following a conversation that is reminiscent of the first Bruce/Natasha meeting in The Avengers. It’s a well written scene though it does heavily rely on referring back to their first meeting in ways that the audience will pick up on without it making complete sense in context for the discussion to play out in that way. Banner’s death does raise the stakes appropriately as killing the Hulk is widely believed to be next to impossible so it establishes the threat as a significant one. Knowing it can strike at any time unseen is another major issue so the episode does build the threat impressively.

A ticking clock is added when Loki (Tom Hiddleston) brings an Asgardian army to Earth looking to avenge Thor’s death. He gives Fury an ultimatum to provide answers before a full scale Asgardian attack will take place. It’s a problem at that point because Fury has no idea who the culprit is and lacks the resources to deal with an Asgardian army. It does raise the stakes but also feels disconnected from what the episode was doing prior to this. It could be that there is too much temptation to make use of as much MCU canon as possible which can result in episodes being overstuffed with content. 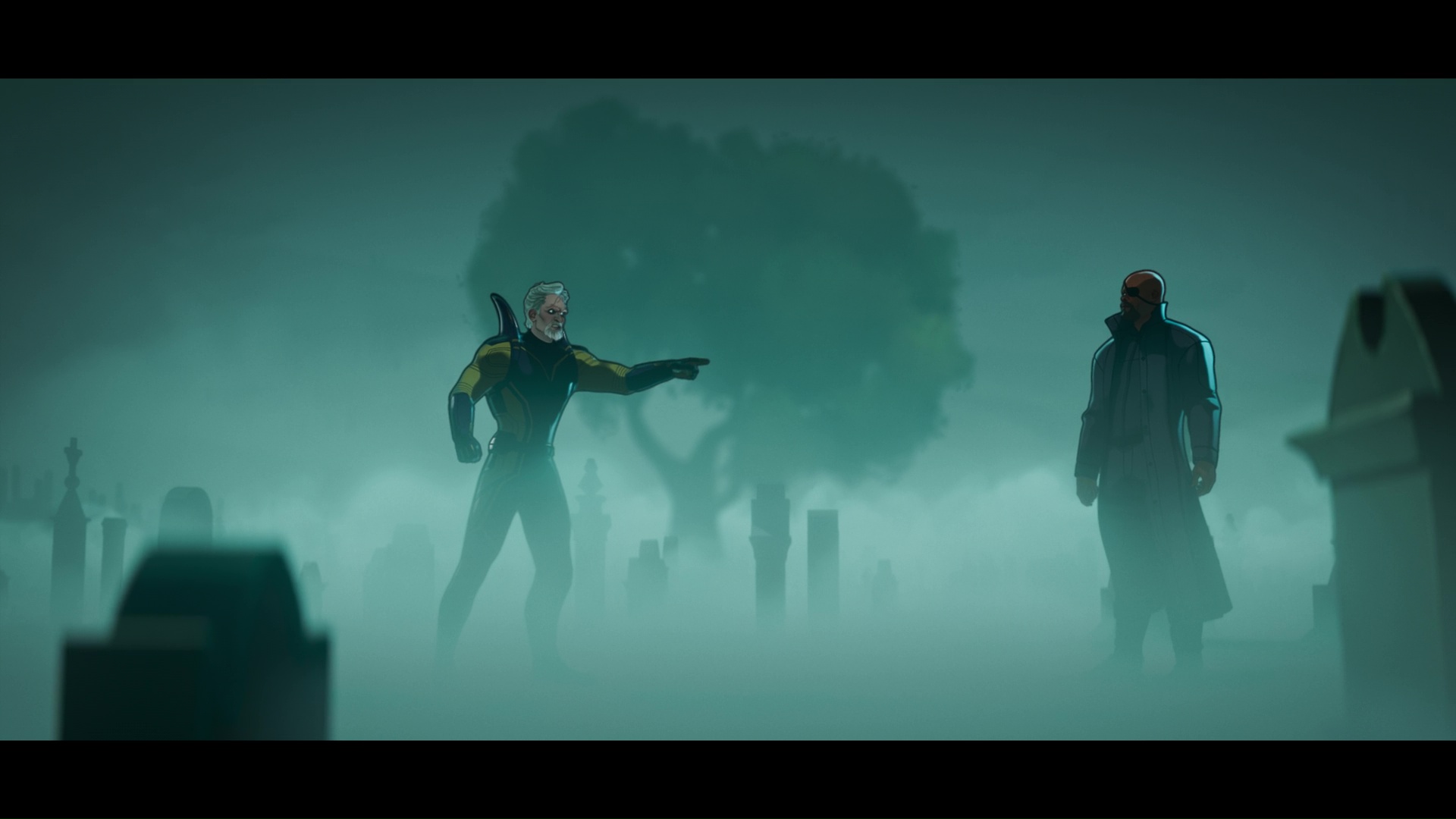 Seeing Fury match wits with Loki obviously calls back to him doing this in The Avengers but works really well because they are two powerful personalities clashing. Despite being massively outclassed by Loki and his army Fury still regards him with confidence bordering on arrogance and gets his attention through showing no fear. Their dynamic was very watchable in The Avengers and is replicated well here under the different circumstances.

The answer makes for an impressive twist as it reveals that the point of divergence in this version of events is far earlier than the beginning of the episode suggests. Hank Pym (Michael Douglas) being revealed as the murderer with his motivation being that his daughter, Hope was killed while working for S.H.I.E.L.D. was a genuine surprise that is also a bit of a cheat. Many mysteries are well put together because eagle eyed viewers would be able to solve them by following the clues provided in the content itself or see how it fits together on repeat viewings. In this case the solution requires information that the viewer doesn’t have access to until the answer is revealed. This works here because the mystery is compelling by itself and the novelty of delivering alternate takes on established MCU canon hasn’t worn off yet but there’s no denying that the solution is a cheat.

Another problem with the solution is caused by the brevity of the episode. The Hank Pym reveal arrives so late that it’s difficult for it to have the necessary weight because it amounts to a quick scene between him and Fury before being resolved. Hank Pym being driven mad by the loss of his daughter and looking to bring down those he feels caused it is a great idea and draws on the instability attributed to the character in the comics but it’s a quick moment that doesn’t have time to breathe.

Similarly the Asgardian invasion doesn’t add much to the overall narrative. Loki’s well established despotic tendencies mean that his decision to stick around on Earth is entirely in keeping with his character but it doesn’t really add anything other than extra stakes that ultimately prove meaningless. Fury being in a desperate situation with the suggestion of hope in the discovery of Captain America and bringing in Captain Marvel was an impactful ending but there was far too much going on for a single episode. The murder mystery and Hank Pym as the central antagonist would have been enough rather than building to the large scale invasion that ultimately doesn’t match up with what the bulk of the episode focused on. This episode amounts to a procession of things happening with some strong character work but an overall messiness to the storytelling. 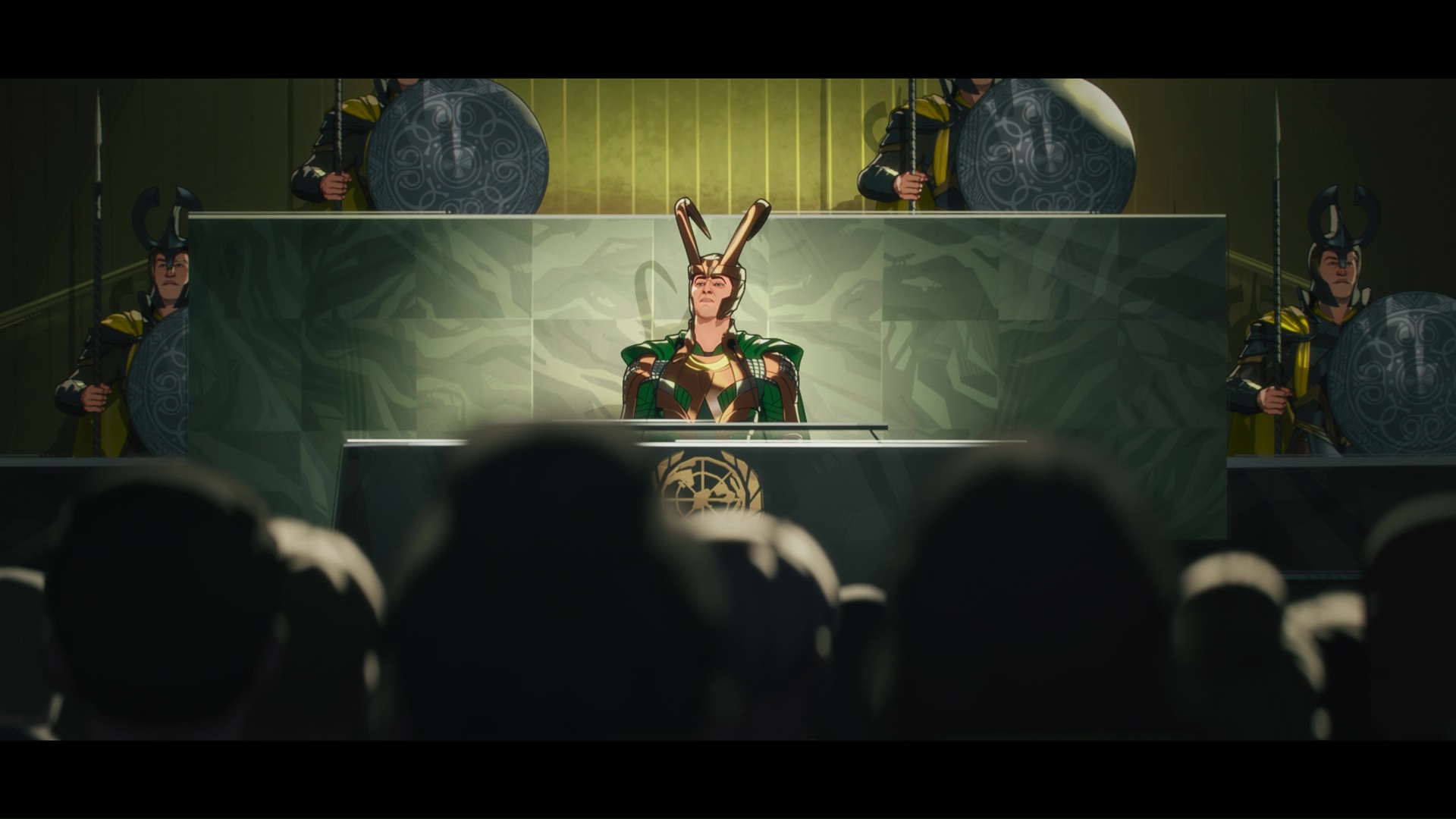 Some people you just can’t get rid of

An uneven episode that starts out as an engaging murder mystery but becomes messy after taking on too much. The murder mystery aspect of the narrative was where the episode was at its strongest with an excellent showcase of Natasha’s skills and intelligence. There isn’t enough focus on Natasha as the episode keeps cutting to Fury or Coulson to bring in the wider context. When it does focus on the mystery the episode is really strong with it escalating naturally as more developments occur. A big problem is that too many things are introduced outside of that such as the appearance of Loki and the Asgardian army. It does raise the stakes and adds a ticking clock but it’s also disconnected from what the episode has been doing before this point. There are some really strong character beats such as the opening scene that quickly establishes the trust Fury has in Natasha that is continued when he automatically assumes she’s not responsible for the murder. Natasha’s conversation with Bruce Banner calls back to their first meeting in The Avengers an an obvious yet effective way and Fury matching wits with Loki replicates that dynamic in The Avengers nicely.

The reveal that Hank Pym was behind the murders was an impressive twist that counters the audience expectation of when the divergence occurred. It’s a bit of a cheat as the answer isn’t something the audience could ever figure out since it relies on information not provided to them but Hank Pym’s motivation makes complete sense. It works because the mystery is compelling by itself but it remains a cheat. It also comes so late in the episode that it doesn’t have the necessary impact and is quickly overshadowed by Loki’s invasion. A murder mystery with Hank Pym revealed to be the antagonist would have been enough for this story rather than overstuffing with extra stakes that ultimately prove meaningless. Ending on the discovery of Captain America and the arrival of Captain Marvel was impactful but the invasion doesn’t match up with what the episode started with. It amounts to a procession of things happening with some strong character work but an overall messiness to the storytelling.