“…Thor Were An Only Child?”

What If…? takes a look at a universe where the God of Thunder never had his mischievous brother in his life growing up and how that change would have shaped him.

The recent episodes of What If…? were more tragic in their setup in various ways so a lighter touch was in theory what was required as a bit of a palate cleanser. A hedonistic party animal version of Thor (Chris Hemsworth) certainly provides that light touch but how successful the episode is will ultimately boil down to personal comedic taste. 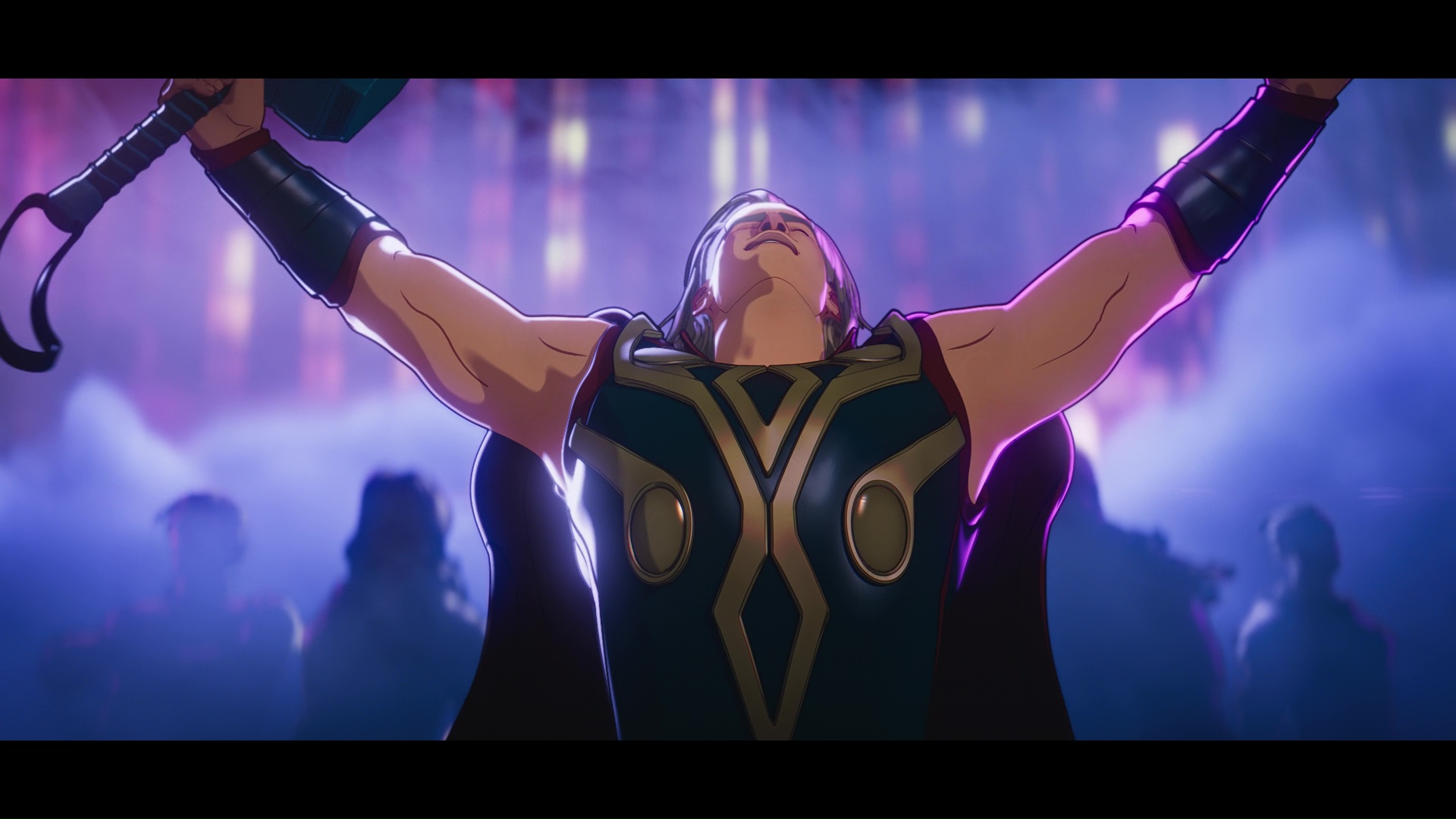 For me this didn’t quite work because the comedy on display certainly wasn’t to my taste. The setup was engaging with a clean shaven only child Thor driven only by the pursuit of revels acting as an antagonist of sorts. Instead of being banished to Earth by Odin in order to learn humility he comes to Earth looking for a good time and invites all his friends from across the Nine Realms to join him. The danger is supplied by godlike beings acting on impulse creating a rapidly accelerating situation that those on Earth have no control over.

The idea of Loki (Tom Hiddleston) being a net positive influence on Thor as they grew up together is an interesting one. Their rivalry forged a sense of responsibility within Thor that predates his banishment to Earth to a degree and continues to grow as he progresses through his further appearances in the Marvel Cinematic Universe. It’s easy to assume that Loki was a problem child growing up which made Thor take on the role of the responsible older brother as he was groomed for the position of King. Without that influence in his life challenging him to be better there was nothing to temper Thor’s hedonistic tendencies which creates an uncontrollable party animal who puts entire planets at risk without intending to.

Thor isn’t an antagonist in the traditional sense as he isn’t malicious or malevolent. He’s a threat due to ignorance which is arguably just as bad but Chris Hemsworth does a great job playing this version of Thor as playful and effortlessly charming. It’s a bit of a stretch to accept that he wins over the gathered crowd in Las Vegas within seconds of his arrival and Jane Foster (Natalie Portman) almost as quickly but it’s believable that he would be that enthralling due to a number of factors. 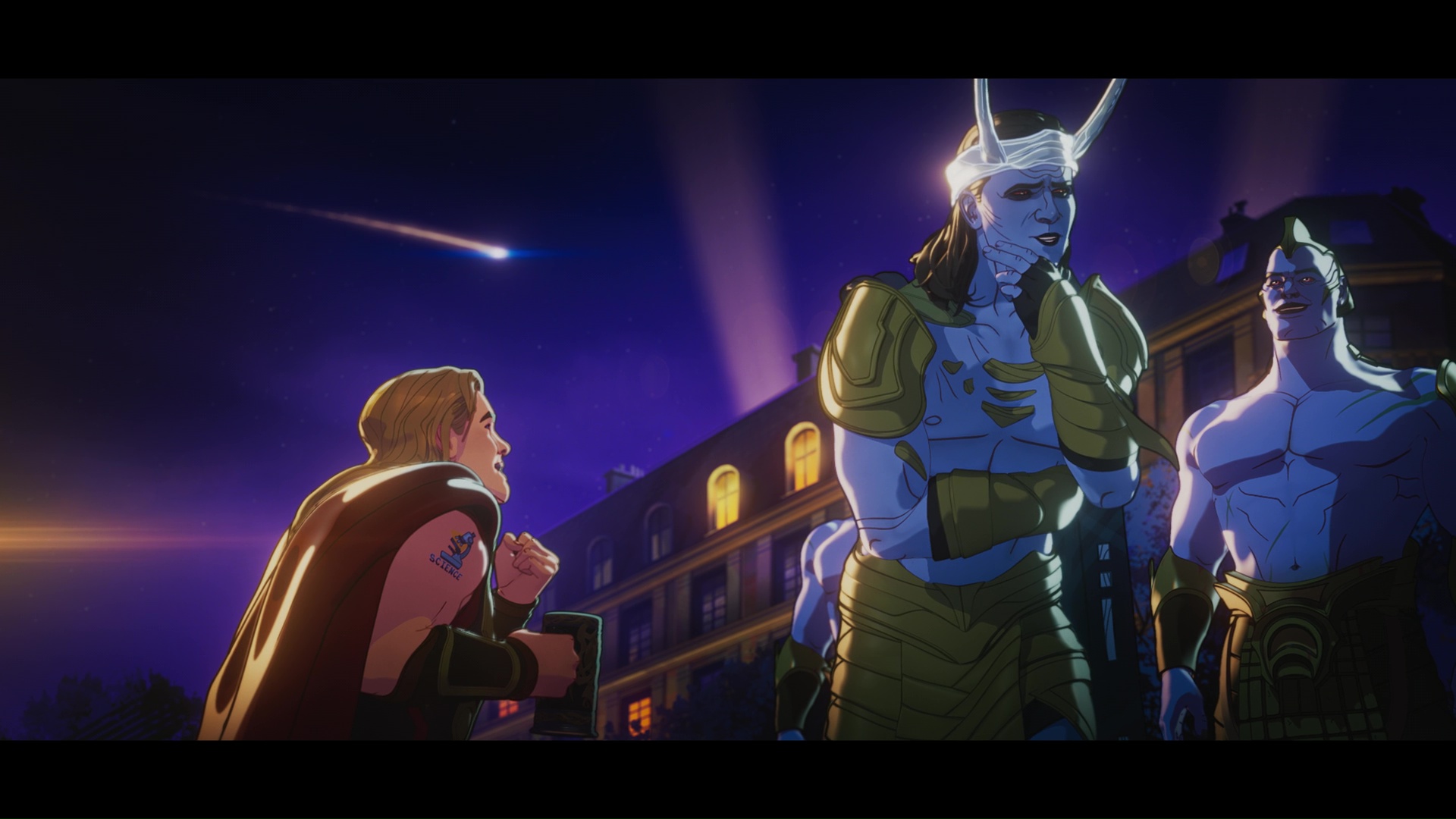 Brothers from other mothers

The closest thing to a protagonist this episode has is Natalie Portman’s Jane Foster. She touches base with the various elements on offer and moves the plot forward more than anyone else. She connects with Thor who instantly takes a liking to her, consults with Maria Hill (Cobie Smulders) and S.H.I.E.L.D. around how to deal with this problem, interacts with Carol Danvers aka Captain Marvel (Alexandra Daniels) and helps to resolve the problem by getting Frigga (Josette Eales) involved. The episode doesn’t quite follow her perspective and there’s limited sense of who she is as a character but her connection to Thor as well as the other characters propels the narrative.

There is a strong focus on comedy with cameos from Jeff Goldblum’s Grandmaster attending the planetary party along with Korg (Taika Waititi), Nebula (Karen Gillan), Drax (Fred Tatasciore) among others. Even Surtur (Clancy Brown) joins in the fun taking a break from his destructive role to unwind and flirt with the Statue of Liberty. It’s all well presented and consistent in the way it’s deployed but it wasn’t to my personal taste so the constant onslaught of gags became tiresome very quickly. Another issue is that the focus on how out of control the party was prevented the plot from progressing for too long which made the middle of the episode bloated. A common criticism against What If…? from me is plotting that moves too quickly but part of this episode had the opposite problem.

Outside of that the episode was well paced with a simple story that didn’t demand a lot of time to tell it. In essence it’s the classic story of a teenager throwing a wild party while their parents are away and having to hastily clean up before they return. Since the story is the party there’s not much to add though as said above the actual party section of the plot is something I found to be tedious. 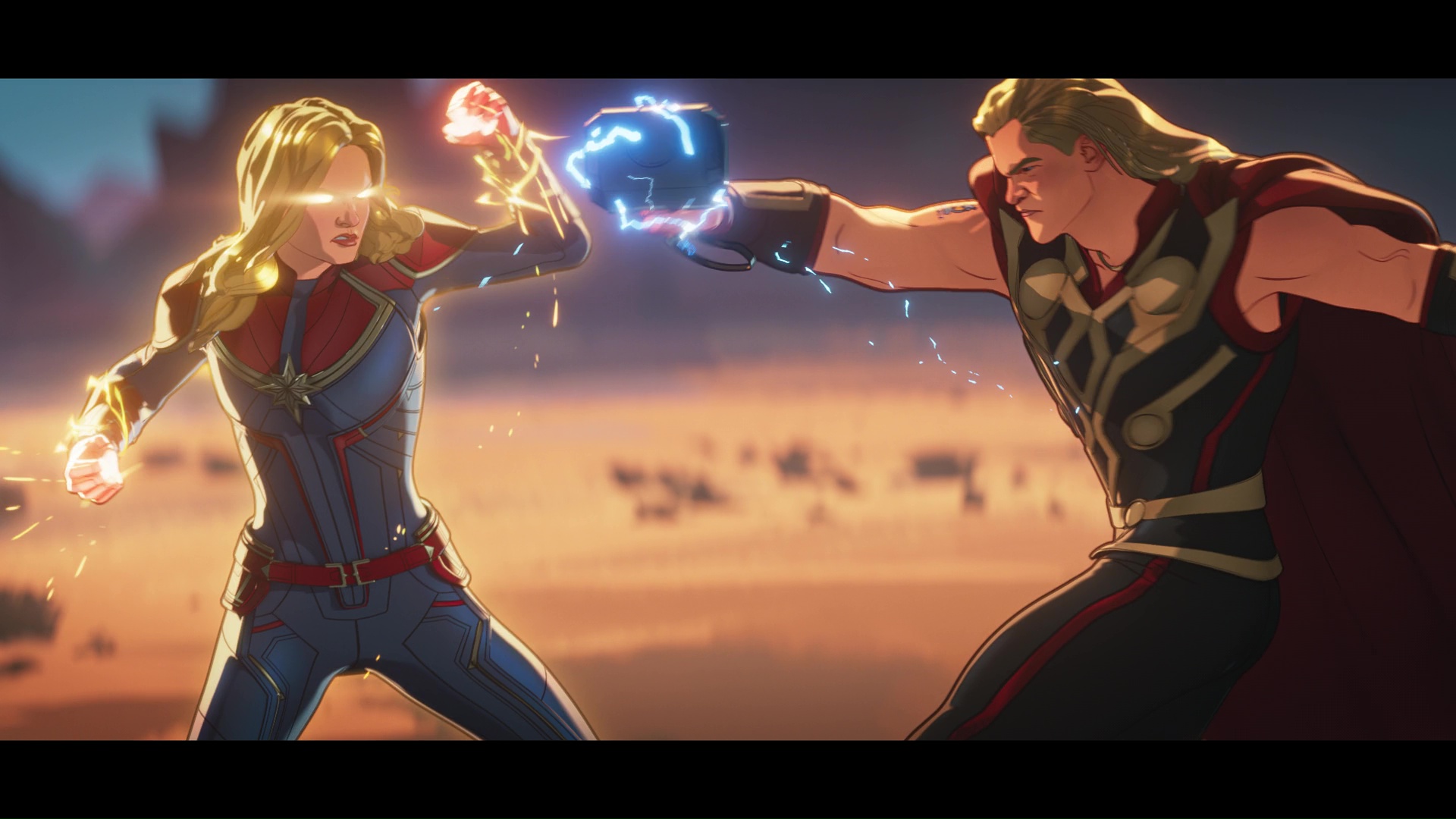 With this being a Marvel Cinematic Universe adjacent story other elements are pulled in to enhance the narrative. In this case Carol Danvers is summoned to deal with Thor as she is the only known being powerful enough to give him a run for his money. The extended fight sequence between them is creative and fun with a great showcase of their powers. It does stray into the territory of a sequence involving invincible beings hitting each other with no clear winner emerging but it works well as a sequence that highlights the accidental threat that Thor represents when he doesn’t care about the consequences of his actions.

Frost Giant Loki was brilliantly deployed as well. Tom Hiddleston’s performance brilliantly crafted an alternate version of Loki more laid back than the familiar despotic narcissist that viewers will be so familiar with. It was a nice touch to have them be good friends without being raised as brothers as it allowed for brief exploration of this version of Loki’s personality in a way that didn’t appear forced.

The resolution involving Thor scrambling to put Earth back the way he found it before Frigga arrives was a nice touch. Thor being afraid of his mother’s wrath was a fitting conclusion to such a ludicrous concept and seeing him intimidate the party guests into helping him clean was a strong moment. The cultural exchange misdirect was difficult to accept but in concept it worked. Thor achieving humility in a way by going to Jane to ask her on a date was an impressive riff on the lesson learned by Thor in his first film.

Ending the episode on the cliffhanger of what appeared to be Ultron robots coming through a portal led by a corrupted version of Vision with all of the Infinity Stones in his possession was attention grabbing and Uato’s reaction strongly suggests this is the point that he has to get involved. Having this come after an unambiguously happy ending that surprised even Uato made it all the more unexpected and  hints at connections between the different universes witnessed so far. 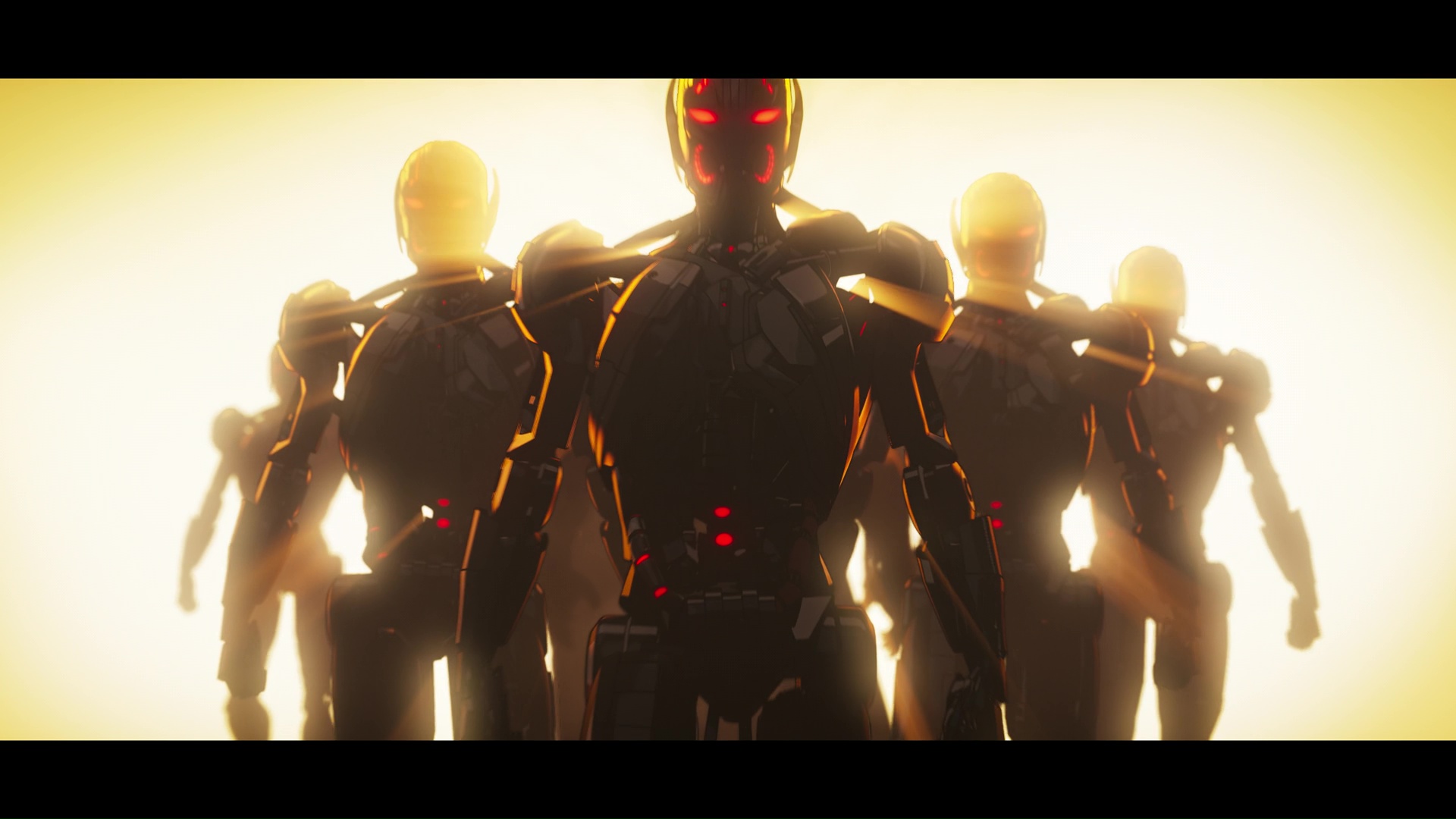 A light hearted episode that fully commits to the comedic tone while having a lot of fun with its premise. Comedy is always going to be subjective and this didn’t quite work for me personally but the episode fully commits to what it sets out to do and delivers on it in spades. Chris Hemsworth is believable as an effortlessly charming alternate version of Thor who is an antagonist because he’s ignorant as to the consequences of his actions. Jane Foster is the closest thing to a protagonist the episode has as her actions propel the plot but there’s a limited sense of who she is as a character. With the story being the comedy situation it lags in the middle with a relentless onslaught of gags that will work for some but didn’t land for me. Outside of that the episode was well paced with comparatively little story to tell fitting the running time more naturally than previous outings.

Some of what was on offer was really well done such as Thor and Captain Marvel’s extended battle. It does stray into the territory of invincible beings hitting each other with no victor but it highlights how dangerous Thor can be when he doesn’t care about the consequences of his actions. The resolution involving Thor scrambling to clean up his mess when he realises his mother is on her way was a nice touch and a fitting conclusion. Thor learning humility in a way by asking Jane on a date was an impressive riff on Thor’s lesson in the first film. The cliffhanger ending was engaging, unexpected and marks a potential turning point for the show in general.