What If…? brings a Zombie Apocalypse to an alternate MCU reality where many of the characters become undead monsters.

It goes without saying that Zombie Apocalypses are abundant in modern media. It’s arguably badly overused but they also still resonate with audiences in very real ways so it’s easy to see why creators go to that well of storytelling so frequently. There exists a comic run called “Marvel Zombies” that forms the inspiration for this particular story. 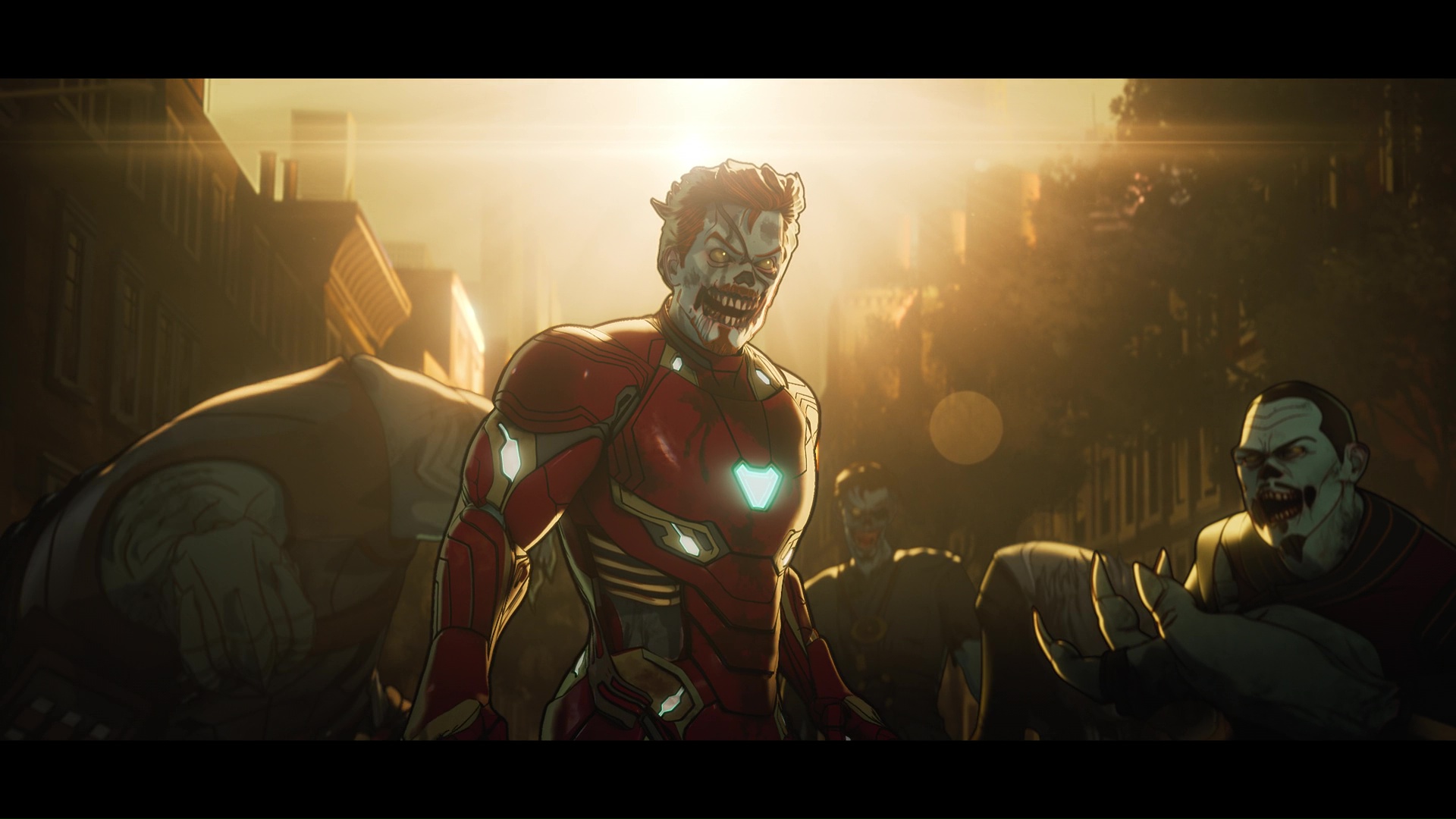 The episode begins with Bruce Banner aka the Hulk (Mark Ruffalo) being sent to Earth just as he did at the beginning of Avengers: Infinity War. The difference in this story is that when he arrives he quickly learns that many of the heroes he once called friends have been turned into flesh eating Zombies. Uato fills in the background by explaining to the audience that Hank Pym’s journey to the Quantum Realm to rescue his wife started the viral outbreak as she contracted a virus during her time in the Quantum Realm. Following their return the virus quickly spread until most of the world was overrun with the undead.

As is common for this show the story moves very quickly and throws a lot of information at the view over a very short period of time. This remains one of the consistent problems with the show as most of the episodes try to cram too much into the time allotted which makes them feel overstuffed. This episode has that problem with far too many characters, a variety of situations and a plot that doesn’t actually end. I mentioned in earlier reviews that the novelty of alternate takes on particular MCU events is something that can only be sustained for so long and the limits are starting to show here.

The most successful episodes have built their own world out from whatever the change happens to be and the least successful are riffs on the material that was presented before. This falls into the latter category with much of what it has to offer hinging on the events of Avengers: Infinity War being interrupted by a Zombie Apocalypse. In fairness, the plot of Infinity War almost totally fades away once the Zombies are introduced but at the same time those events hang over the episode. 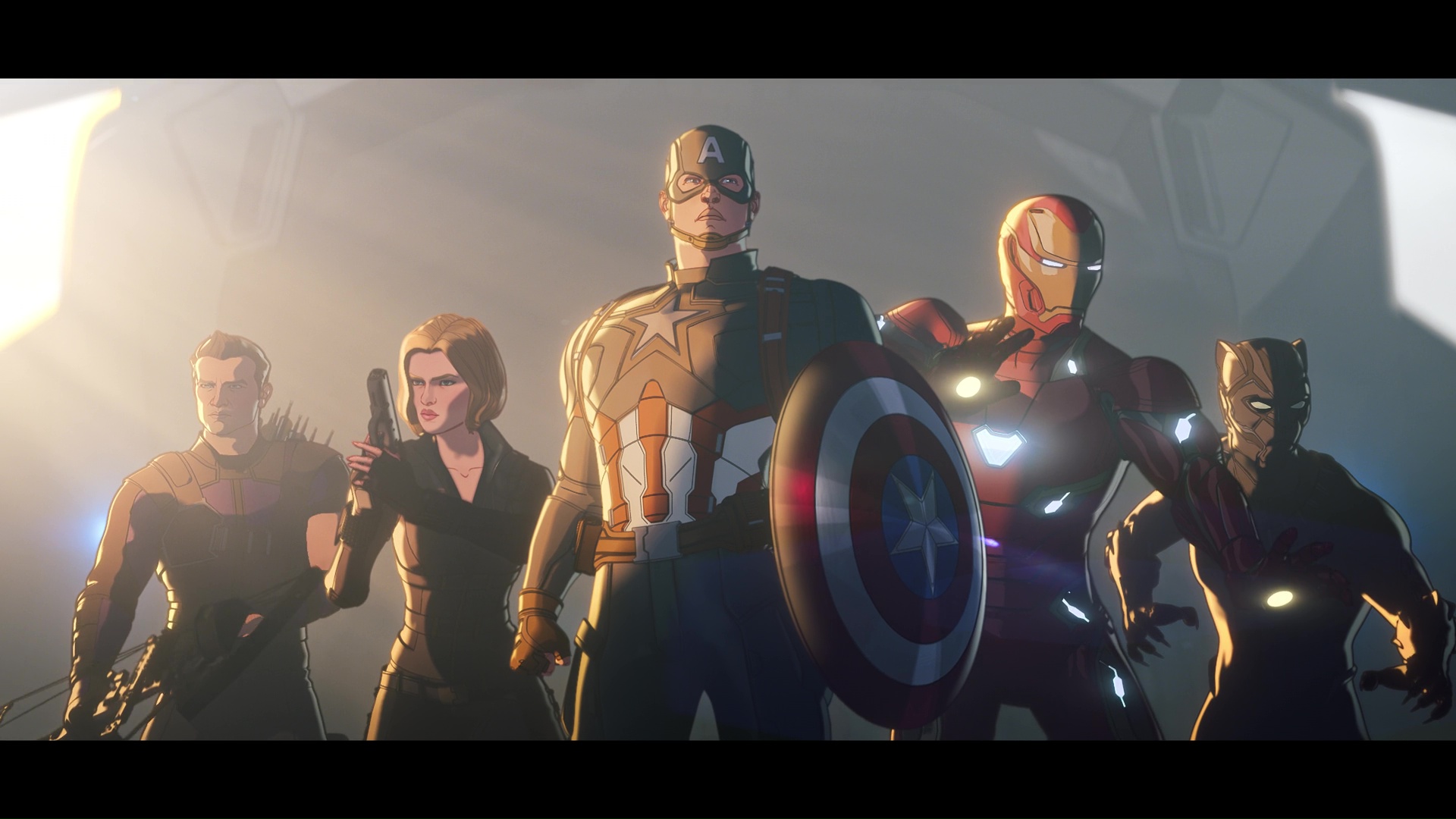 There are things that are done particularly poorly and it comes down to the necessary rapid pace of the storytelling. Characters die throughout the episode whether that be the uninfected having to kill their Zombified friends so that they can survive or the uninfected characters being picked off one by one. The problem with this episode’s approach to those deaths is that there is very little emotional weight attached to them. Bucky (Sebastian Stan) kills Zombie Steve and remarks that he’s sorry and that it’s the end of the line. It’s so lazily handled and does nothing with the strong bond that existed between those characters over the course of the MCU.

Most of the other deaths are similarly handled with a quick comedic remark before moving onto the next thing. Uato establishes that the timeline is only two weeks on from the start of the outbreak so it can’t even be dismissed as them being so roundly desensitised to losing people as there hasn’t been enough time to truly internalise the situation.

The one exception is Hope aka The Wasp (Evangeline Lilly) becoming infected. The episode takes the time for this to be significant. It’s an unfortunate circumstance as it comes so close to the possibility of a cure that there’s debate over whether it’s worth waiting to see if it pans out before writing her off. Hope is ready to sacrifice herself if it means the others can continue but Peter Parker aka Spider-Man (Hudson Thames) refuses to allow that. 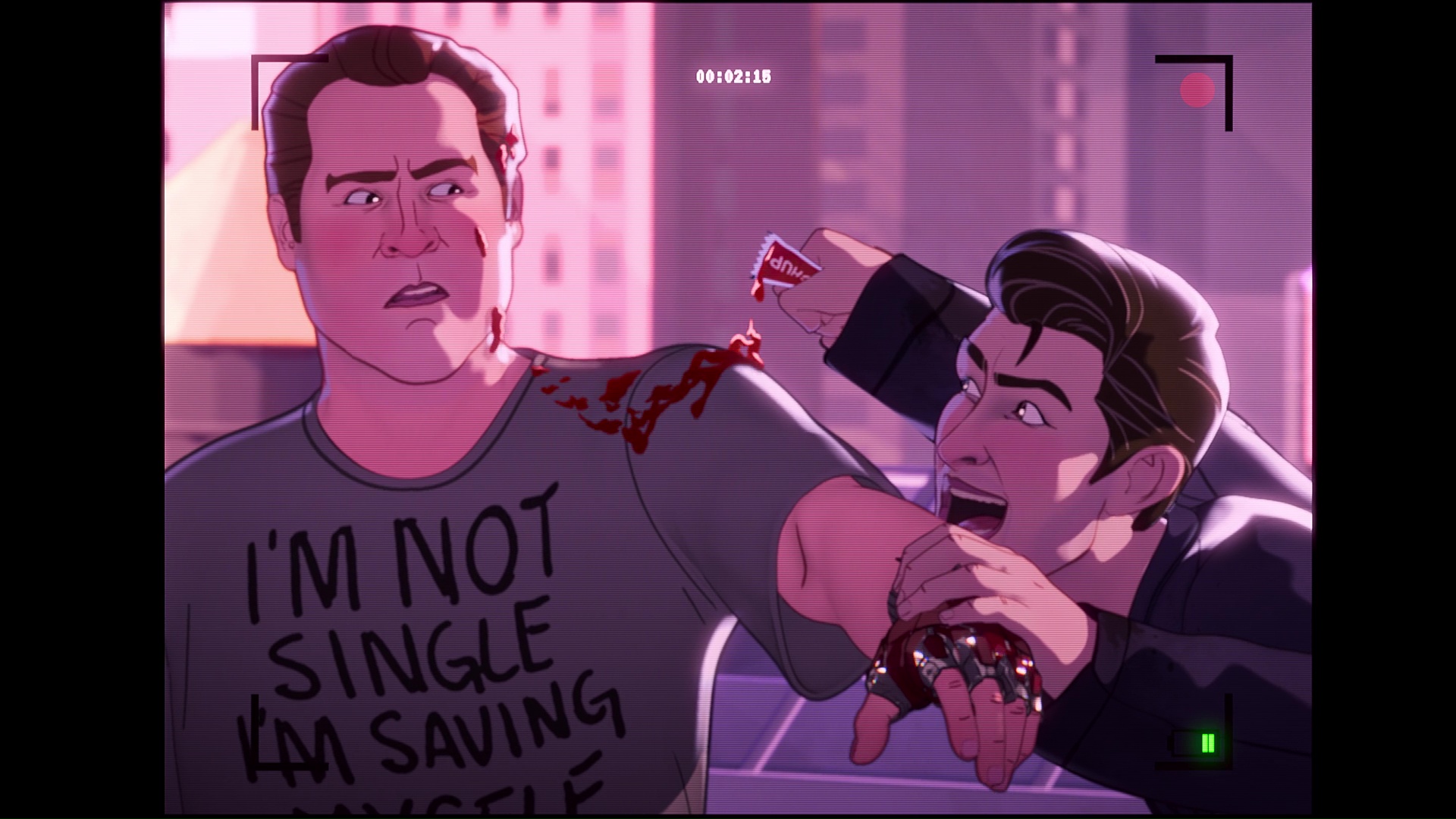 This ends up being the most meaningful content for Peter Parker that the MCU has ever delivered and it’s in an alternate reality. It’s the first explicit mention of his Uncle Ben along with what that loss taught him. Throughout the episode Peter remained optimistic about a favourable outcome despite the increasing likelihood of that being impossible with each setback. When questioned about it he references all he has lost and references advice his Aunt May gave him about smiling even under the most dire of circumstances. He is driven to keep going because there’s nothing else to do and remaining hopeful is the only way to do that. It’s a wonderfully introspective look into how Peter Parker views the world and any situation that he is faced with and it far eclipses anything done in the films while drawing on a common mindset his comic book counterpart holds. His words showing wisdom beyond his years endears him to Hope and the others with this paying off in Hope’s sacrificial moment. There is a secondary payoff when Bruce urges him to avenge them and make all the suffering count. As a Spider-Man fan this was an excellent depiction of the character.

Another strong emotional beat belongs to Vision (Paul Bettany) who is sitting on a potential cure for the Zombie plague but it’s not as simple as administering it. He hides a dark secret in the form of kidnapping people to feed the zombified Wanda. His latest prisoner is T’Challa (Chadwick Boseman) who is being sliced up for Zombie Wanda to feast on. The cure doesn’t work on her because her powers prevent it from taking hold and Vision can’t bring himself to kill her. This mirrors the grief driven narrative in WandaVision where Wanda was unwilling to let Vision go after losing him. Vision finds himself in a similar situation and when he realises his emotional weakness he takes his own life because he can’t handle the weight of responsibility associated with his decisions and actions.

The final excellent emotional beat comes at the very end when even Peter is feeling hopeless after all the loss he has experienced in a very short period of time. T’Challa encourages him to be hopeful by stating that death is not the end which carries extra weight on a meta level when the words are spoken by Chadwick Boseman. It ends the episode on a hopeful note with added threat where Uato suggests that curing the Zombie plague isn’t necessarily a good thing as a Zombified Thanos waits in Wakanda. It’s hopeful yet ominous which makes for an impactful contrast. Following his near interference in the previous episode, it’s surprising that Uato’s presence was so minimal in this outing though it’s unclear whether there is supposed to be any deeper connection beyond having him observe these alternate events at this point. 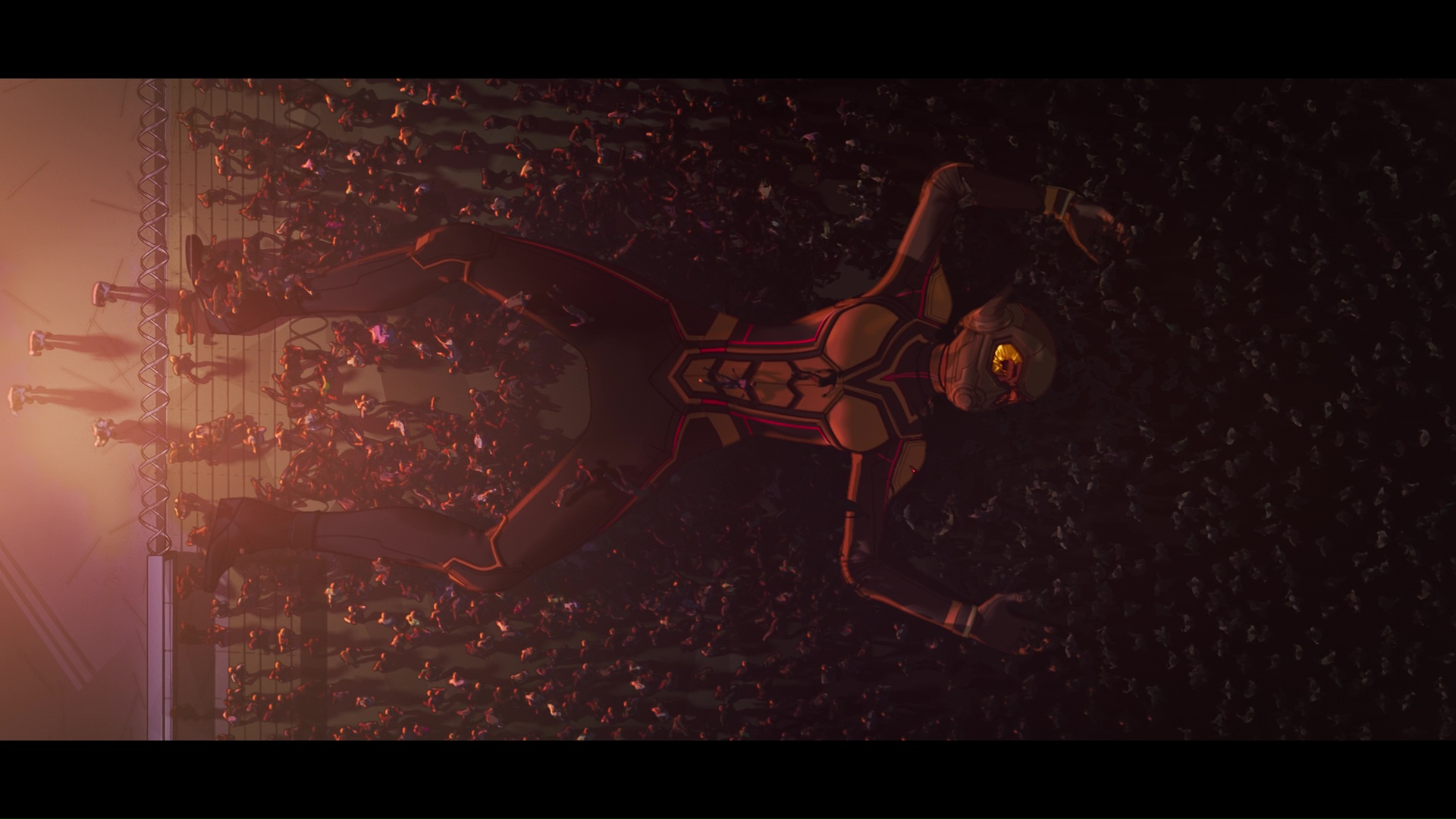 The episode contains a great deal of comedy with Peter Parker acting as a source throughout. His Zombie Apocalypse survival tutorial video ala Zombieland is a notably good example of comedy that establishes the rules at play while providing a fun collection of gags associated with those rules. Peter makes frequent reference to horror movies and points out why particular actions are a bad idea which ends up calling out some of the mistakes made in the episode itself. With so much emphasis on what shouldn’t be done it’s far more egregious when those rules are ignored. Bucky wandering alone in a pitch black facility stands out in particular but there are other examples of where the characters should have known better since they’re constantly told about it. This is done to advance the plot and sacrificing character intelligence in order to do that is never a good idea.

As for the comedy some of it works and some of it doesn’t. There’s a major imbalance within the episode between comedy and tension. Any opportunity to deliver a quip is taken which robs many of the moments of their urgency. This is especially apparent once the bodyless Scott Lang (Paul Rudd) shows up and is constantly making jokes. There is an attempt to justify it by stating that being how he copes in dangerous situations but it only serves to contribute to that imbalance.

The final product is more of a romp with very low stakes and little to invest in emotionally beyond some standout moments. The episode relies heavily on the viewer having an existing connection to the characters which makes sense for What If…? as a show but it does encourage laziness in the storytelling where emotional heft is required. The lack of a true ending is frustrating as it means the episode doesn’t really build to anything. As a romp it certainly has its moments but the overall package is far less than satisfying. 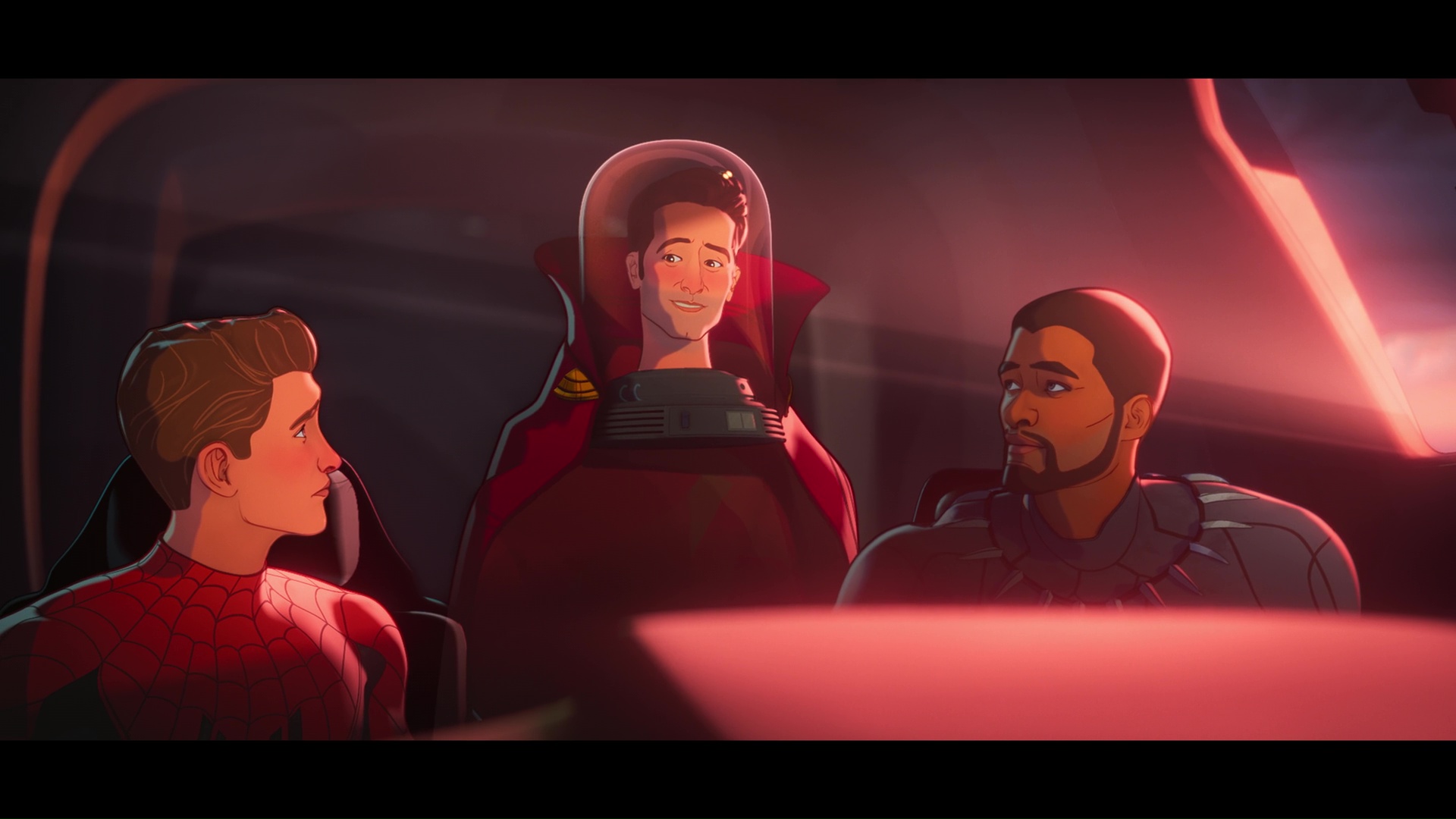 An uneven episode that boasts some excellent emotional moments but suffers from lazy storytelling, a lack of stakes and a massive tonal imbalance. As with most episodes of this show the storytelling moves very quickly which is a disadvantage in this case as the episode is overstuffed with content. There are too many characters and a variety of situations culminating in a non ending. This does have the notable advantage of being the best showcase of Peter Parker the MCU has to offer. A wonderfully introspective look at what drives him is offered and it’s excellently done. It pays off in how he connects to Hope and Bruce in different ways. Another strong emotional beat comes from Vision that mirrors the connection he shared with Wanda in WandaVision. The final excellent emotional beat comes from T’Challa with added weight attached by the words being spoken by Chadwick Boseman. Ending the episode on a hopeful yet ominous note was a strong contrast.

There is a massive tonal imbalance that drags the episode down. Peter Parker is a source of comedy throughout with a fun video tutorial outlining the rules for surviving the Zombie Apocalypse. It works well though makes it more egregious when those rules are ignored in favour of advancing the plot. Characters lacking intelligence to further a plot is never a good idea as is shown here. When Scott Lang’s head shows up the comedy kicks into overdrive and overpowers any associated tension. Adding to this is the abundance of deaths with no time given for them to mean anything as the episode needs to move onto the next plot point. The end product is very much a romp with low stakes and little to invest in emotionally beyond some standout moments. The lack of a proper ending is frustrating as the episode fails to amount to anything. It definitely has its moment but the overall package is less than satisfying.